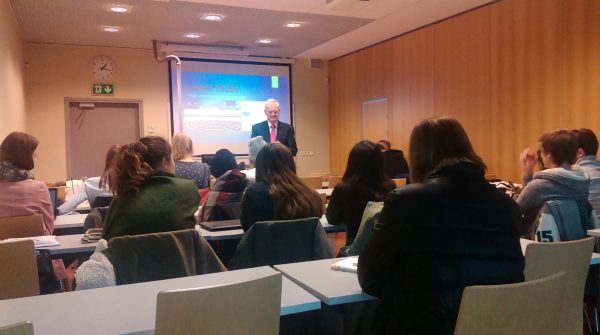 The Tallinn University organized a lecture and discussions between a former MEP and students on a current issue : The Brexit and the European Union.

On behalf of the FMA I lectured at the Tallinn University of Technology on 7th and 8th of December 2016. This was a welcome opportunity to reacquaint myself with Estonia. I was first there as part of a special EP delegation to the Baltic States in 1991 immediately after independence. That was a strange time. Barricades were still around the Parliaments, Russian troops still roamed the streets trying to sell off bits of their equipment and the rouble remained the currency. Infrastructure was basic, particularly in telecommunications. Crucially both Sweden and Finland provided mobile phones as part of their initial aid mainly to Latvia and Estonia which greatly aided their transition. Estonia has embraced new technology with enthusiasm. It has the world’s fastest broadband and free wifi is widely available. The Government and Parliament are digital by default. In contrast to 1991, I felt that I was in a very

modern and dynamic country. Public transport in Tallinn is free to all residents with new trams acquired from Spain in a deal which enabled the Spanish to offset some of their carbon emissions. Cheap pre-school education is widespread and there is a good health system. Government support seems to go to young families to ensure a healthy birthrate, but pensioners suffer from low incomes. There are still some issues with Russian minorities, especially the older population who have not been able or not been willing to integrate, or who lack the skills the modern economy demands.

My prime purpose was to lecture on Brexit on the 7th. The following day I led two seminars, one on the EU in general and the other on Security policy. I had assumedthat I would be addressing mainly Estonian students, but I was wrong. The audience was multinational, although dominated by Finns. Apparently, it is a lot cheaper to study at an Estonian university than many other places. Courses are taught in English, so attracting students from all over the world. My lecture on Brexit was at 8.15 in the morning! Despite this, I had an audience of over 100. Brexit was not an easy subject for me, given that it represents the shattering of my lifetime dreams and hopes. I highlighted opinion polling on values, which showed that the more people held what we might call “traditional” values, such as believing in strong discipline in schools, anti multiculturalism, anti feminism, anti gay rights, the more likely they were to vote for Brexit. This is also a phenomenon witnessed in the Trump election in the USA. This backlash against the modern world is probably the greatest challenge facing us all. I outlined many possible scenarios for the UK’s future, all of which are complicated and none of which, in my view will make the UK better off. I remain to be convinced that the British government really knows what it is doing or knows what it wants. Elsewhere, I was struck by how focussed students were on the balance between ensuring democratic legitimacy and accountability in the EU on the one hand, and the need for effective EU action to confront the challenges it faces on the other. The future of the EU lies in getting that balance right.