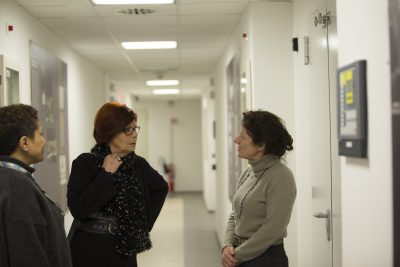 It was an exciting prospect: I was going to take part in the teaching project run by the EU Historical Archives in Florence. My contribution would be to participate in not one but two panel discussions with students and school pupils focusing on my practical experience of life as a Member of the European Parliament and on specially chosen topical issues, such as Brexit, migration, the re-emergence of nationalist movement in (almost) all parts of Europe and the future of European integration. And all that on the eve of the Italian elections. I was determined to do my best to make it clear that, against the background of the ever more pressing challenges of a globalised world, there is no alternative to a strong, united Europe which acts as a force for peace. Unfortunately, Mother Nature had other ideas. During the night of 1 March a thick blanket of snow fell on Florence, bringing public life to a halt. All schools and universities were closed, and only a very few buses and trains were running. Both my panel discussions fell victim to the weather as well.

Happily, though, I was still able to visit the Historical Archives and see at first hand just how committed the staff there are to their work. I must admit that previously I had not given that work much thought. It was all the more impressive, therefore, to be able to browse through old documents, to come ‘face to face’ with people who were present when European history was made and to read their accounts of those events. Some of what they wrote about has been forgotten; much of it, today, is taken for granted. Keeping documents and assessing them in the light of their historical significance is a vital task of immeasurable value both for us and for future generations. Those documents bear witness to motivations, emotions and hopes; they embody memories of people who argued and suffered to shape a Europe with a future based on peace and mutual respect. I would urge researchers, journalists and historians to visit. My stay in Florence also offered me an ideal opportunity to share my memories and experiences of life as an MEP, as my contribution to the ‘Oral History’ project.

Working under the auspices of the European University Institute (EUI) and in cooperation with the Historical Archives and the De Gasperi Research Centre, a small group of former EP officials, coordinated by Alfredo De Feo, wants to put together a collection of representative first-hand accounts which show how the history of the European Parliament can be portrayed in a more personal, more vivid and more comprehensive way. More than 100 former Members have already agreed to take part. If at all possible, the results are to be published in book form before the European elections in 2019, exactly 40 years after the first direct elections to the European Parliament. I hope that the remaining hurdles can be overcome and that many former Members will share their memories, in the service of the project.

I am sure that the detailed appraisal of the successes achieved, and the shortcomings brought to light, which this project may trigger can make a significant contribution to the work of the EP. Strengthening the EP and making it more democratic is a long-held wish of the European family of peoples. Even though in Florence I was denied the opportunity to hold a free and frank discussion with young people about the present and future of our shared European project, I can say this: we have every reason to work together to continue what our forefathers started more than 70 years ago, in keeping with the saying that only those who understand their past can face the present and the future with open hearts.