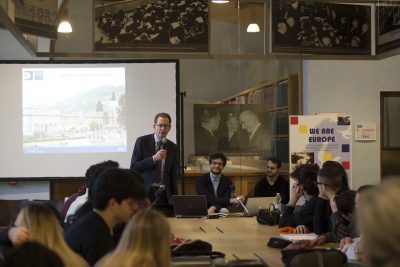 It was on a cold February morning that I made my way from the charming Florentine hotel into which the Historical Archives of the EU (HAEU) had booked me to the magnificent Villa Salviati, built on the remains of the 14th century Montegonzi Castle, famous for its cultivation of grape and jasmine. It passed through the hands of wealthy Italians, Brits, Swedes and Americans before being abandoned in the last century and bought in 2000 by the Italian government for the European University Institute. Today, restored to its former glory at the foot of a Cypress-lined path, it contains over 7km of shelving under an ornate English garden and alongside a vividly decorated grotto for the EU’s archives, including those of Spinelli, de Gasperi and Spaak.

Here I was to address school students from the Liceo Artistico Alberti about my life as a MEP and to assist them in their project on the challenges facing Europe. Director Dieter Schlenker also kindly invited me to talk to a dozen researchers currently attached to the HAEU about the papers I have deposited there from my twenty years in Parliament, covering particularly my time as LIBE Committee Chair (1999-2001) and Liberal Group Leader (2002-2009). And the impressively well organised archivist Mary Carr was very helpful in assisting me with research I am conducting into the life of Sir Russell Johnston, MEP from 1973-1979 and subsequently President of the Parliamentary Assembly of the Council of Europe. The HAEU regularly invites schools in Florence to make use of its facilities and organises programmes in European awareness for their senior pupils. I am but one of the former MEPs fortunate enough to have participated and am pleased to commend the experience to others.