According to the EP President’s Decision of 26 August 2020, EP Delegations’ missions remain cancelled. Moreover, the evolution of the Covid-19 pandemic remains quite problematic in many EU countries making the situation very uncertain. Thus, the Board had decided to hold the Study Visit remotely and no longer with the physical participation of FMA Members.

On 5 and 6 October 2020, an FMA Delegation of former MEPs led by FMA President and European Parliament Former President (2007-2009) Hans-Gert Pöttering participated in the first virtual Study Visit to North Macedonia. 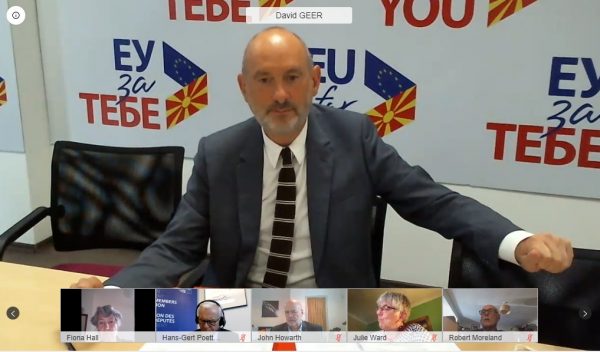 The visit started with a briefing from H.E. David Geer, EU Ambassador in North Macedonia, on the country’s political status-quo after the recent elections and topics such as Human Rights, EU accession, COVID-19 and EU economic support to North Macedonia and co-operation in the region.

During the morning session, the delegation met H.E. Mr Talat Xhaferi, President of the Assembly of the Republic of North Macedonia, who supported the good practice of the Jean Monnet Dialogues and added that the Berlin Plus Initiative is very much welcome by North Macedonia. Dr. Arbr Ademi, Chair of the Committee on European Affairs and Dr. Antonijo Milososki, Chair of the Committee on Foreign Policy agreed that joining the EU could bring stability to the whole region. Dr Arbr Ademi in particular talked about the history of the country and the road to EU integration as a strategic goal to reach stability in the whole region. He also emphasised that “similar to the EU members, we need to put our differences aside and work together in the future”.

The North Macedonian Government’s representatives and the FMA members had vivid and constructive exchanges on different topics such as relations with neighbouring relations, gender issues, church-state relations, SMEs, security and the Covid-19 crisis. 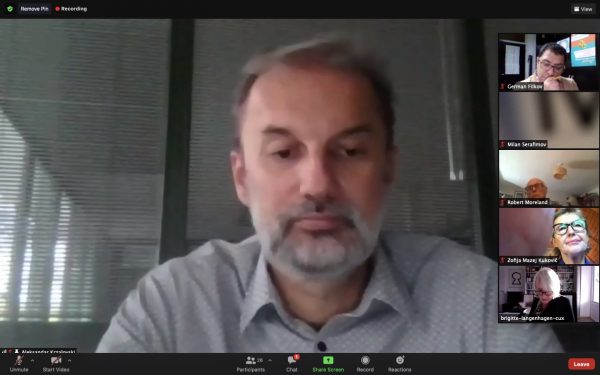 Aleksandar Krzhalovski from Macedonian Centre for International Cooperation, explained that in 2016 a citizens uprising began leading to the early elections and to the arrival of power of the current government, breaking with a past of chaotic relations with the political elites, absolute immunity and abuse of power. Arriving to politics from grassroots movements, the new government members show a more cooperative approach to create new policies and reform the country’s institutions.  One example was the amendment of the Law on Audio and Audio-visual Media Services of the Republic of North Macedonia that now is in general accordance with European and international standards on audio-visual media.

Nevertheless, there are still a lot of challenges ahead, such as fighting corruption, having well informed citizens and restoring the people’s engagement. Just like many other countries in the world, also North Macedonia struggles with “fake news” or rather “disinformation” as Biljana Petkovska from Macedonian Institute for Media, prefers to call it “because fake news has the objective of harm”.

The speakers explained that the CSOs still depend on international capital and should change to a more domestic funding. Zharko Hadji-Zafirov expressed that besides financial support, they especially need moral support. 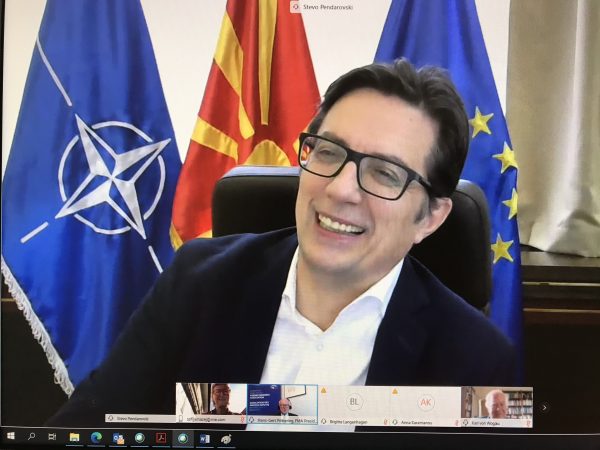 Mr Osmani explained that because of North Macedonia’s ongoing problems with especially Greece and Bulgaria, the country had not met the EU’s values and criteria to join. He gladly announced that he will visit Bulgaria’s capital to work further on the relationship between the two countries, and that North Macedonia’s ties with Greece have become much closer. He indicated that North Macedonia represents a successful model for the entire region in respect of good neighbouring relations and an inclusive society for minorities.

President Stevo Pendarovski said that the working process towards becoming an EU member is not finished yet. Being almost a year without government, plus facing the pandemic and therefore having to postpone the elections was not helpful in the progress. But now, the government is set and the negotiations with the EU and with the neighbouring countries can start. For Pendarovski, the latter is crucial in order for the Balkan countries to have a clear vision towards the European Union. He stressed the shared history: “History connects us, and does not separate us”. He concluded by saying that accession of North Macedonia is not an enlargement of the EU but its completion.

The last speaker of the North Macedonian Government was Deputy Prime Minister for European Affairs, Nikola Dimitrov. He emphasized that in order to become more attractive to the EU, North Macedonia needs to work on its relations with the other Balkan countries and talked of the priority for infrastructure investment to connect capitals in Western Balkans from EU accession budget investment. He concluded that they opened a new chapter between two neighbours, North Macedonia and Greece, and they now need to write empty pages.

To finalise the successful visit, the delegation had a meeting with several students from different North Macedonian universities who expressed their desire to become citizens of the European Union and showed interest in a variety of issues such as Fake news, dispute between Bulgaria and North Macedonia, Brexit and Rule of Law