On 24 and 25 June 2021, a delegation from the Former Members Association (FMA), led by its president, Hans-Gert Pöttering, participated in a virtual visit to Portugal to mark the Portuguese Presidency of the Council of the EU, which ended on 30 June. Over the 2 days, the issues at stake for Europe were highlighted through diverse presentations, discussions and question and answer sessions, with discussions centring on relevant and current political, economic and social issues, such as the economic recovery, social inclusion, migration, health and a digital and green transition. During the virtual visit to Portugal, particular emphasis was placed on the importance given to the social dimension throughout the Portuguese Presidency. The Conference on the Future of Europe (CoFoE) was also central to the discussions, presented more than once as an opportunity for better exchange with European citizens, especially young people, and for a better and more united Europe.

The Vice-President of the Assembleia da República António Filipe opened the virtual visit by greeting the delegation with a welcome speech, in which he emphasised, among other topics, the contributions of the Portuguese Presidency, which, due to the outbreak of the pandemic, had to be adapted. He pointed out that the economic recovery will take some time and that the crisis will probably be a defining issue for the next presidency, just as it was for the Portuguese and German presidencies.

The welcome speech was followed by an address by President Hans-Gert Pöttering, who introduced the FMA’s work on the CoFoE by presenting the FMA Reflection Group on the Future of the European Union. This address was followed by the first question and answer session, during which former Members had the opportunity to ask questions and draw attention to specific issues.

A personal video message from H.E. Marcelo Rebelo de Sousa, President of the Portuguese Republic, to the FMA followed the question and answer session. In his message, the Portuguese President took the opportunity to highlight the importance and role of the FMA and its work. He also underlined the importance of consolidating the EU’s values, which are founded on peace, justice and international cooperation. Furthermore, he stressed that the brutal consequences of the pandemic have widened the social and regional gap in Portugal.

The Portuguese President’s video message was followed by welcome remarks by the Chairman of the European Affairs Committee, Luís Capoulas Santos, who struck a positive note, pointing out that, despite the prevailing situation, ‘all crises bring us opportunities’. He complemented his statement by presenting the CoFoE in terms of its organisation and role, on the one hand, and its function as a tool of direct democracy, on the other. He went on to agree with President Pöttering and also acknowledged and emphasised the central role of cooperation between national parliaments and the European Parliament for the CoFoE. Therefore, according to Mr Capoulas Santos, great hope for the future lies ahead.

His speech was followed by a question and answer session, during which the FMA delegation had the opportunity to share their opinions, with different issues being addressed. Four issues in particular could be clearly identified, namely the development and monitoring of digitalisation, the consequences of Brexit, the green and inclusive transition, and youth, relating, for example, to the Erasmus+ programme. 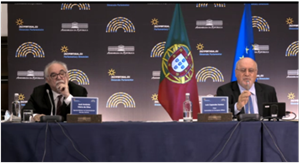 Mr Capoulas Santos responded to the different statements and pointed out that the CoFoE could be an opportunity to attract young people to politics. Two days before the launch of the CoFoE, a session just for young people was organised for them to discuss their expectations. Mr Capoulas Santos underlined that the young people expected issues to be tackled and values such as solidarity, green energy, European leadership and inclusion to be supported. He emphasised that these exchanges clearly indicate that we can put our faith in the future.

After the exchange of views with Mr Filipe and Mr Capoulas Santos, a third exchange was held with the former Portuguese Minister for Labour José Vieira da Silva and the special advisor to Commissioner Nicolas Schmit, responsible for preparing the European Pillar of Social Rights action plan, about the priorities of the Portuguese Presidency, with a focus on the European Pillar of Social Rights. Mr Vieira da Silva started by highlighting the Porto Social Summit, which took place on 7 and 8 May 2021 and which has been described as one of the highlights of the Portuguese Presidency. Mr Vieira da Silva emphasised the importance of the development of a social pillar and of fighting poverty and social exclusion. He also highlighted the dual digital and environmental transitions.

His address was followed by an exchange of views with the FMA delegation, who stressed the importance of a social model. Mr Vieira da Silva responded in the question and answer session by pointing out that even if the EU must continue to be a defender of the economy and be ambitious, limits must be established with regard to the deregulation of unacceptable working conditions in the EU. With this in mind, he highlighted the inauguration of the Next Generation EU package, which will be developed over the coming years and will be linked to the EU’s social programme. Mr Vieira da Silva stressed, furthermore, that it is up to us to tackle these issues – even if it is a difficult battle, it is worth participating and we should not forget that national parliaments can also play a crucial role. These final remarks closed the morning session. 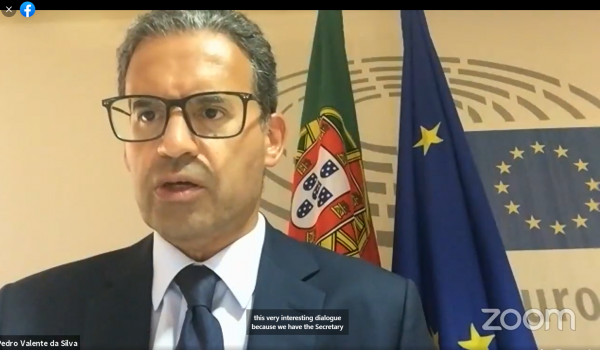 The afternoon session started with an exchange of views with youth representatives from different associations in Portugal and was organised by the Head of the European Parliament Liaison Office (EPLO) in Portugal Pedro Valente da Silva and his team.

The FMA delegation replied to the different comments by sharing their experiences and addressing relevant aspects. President Pöttering concluded the first afternoon session by encouraging young people to be politically engaged, as their engagement could well enable us to get on track for the 21st century.

The second afternoon session involved an exchange of views with the Portuguese Secretary of State for European Affairs Ana Paula Zacarias, who presented and highlighted Portugal’s contributions during its presidency. She pointed out the importance of following up on the work and decisions taken under the German Presidency between July and December 2020, especially regarding the post-COVID recovery and the launch of the CoFoE. Ms Zacarias presented the different issues to be addressed, including the creation of a greener and fairer model, the role of artificial intelligence and digitalisation, the social dimension, resilience, cooperation with various non-EU countries and continents, migration and the work on EU enlargement. She concluded with a summary, pointing out the success of Portugal’s contributions during its presidency.

Ms Zacarias’ address was followed by a question and answer session, during which the FMA delegation had the opportunity to share its points of view and point out some critical aspects. Ms Zacarias replied with a speech that emphasised the need to deliver results, which could take the form of changes to the treaties to tackle the issues at stake for the EU, targeting, in particular, the social dimension of employment rates and the reduction of poverty. Multilateralism should therefore be prioritised and the EU must stand up for democracy and the rule of law, which are part of its identity.

The virtual visit to Portugal continued the following morning with a meeting with Rosalia Vargas, the President of Ciência Viva, which is a Ministry of Science and Technology programme to promote scientific and technological culture among the Portuguese population and which has helped in attracting more students into scientific and research careers. The programme is celebrating its 25th anniversary this year. Ciência Viva is a member of networks such as Ecsite, which is based in Brussels and brings together museums and science centres throughout Europe. Ciência Viva has also launched a programme in cooperation with Portuguese school science clubs that is aimed at all levels from primary to high school. There are currently 247 clubs in the programme and the goal is to reach 600 in two years. Thanks to the exchange with Rosalia Vargas and the Executive Director of Ciência Viva Ana Noronha, who presented the Água exhibition in the Pavilhão do Conhecimento, the FMA delegation had the opportunity to deepen its knowledge about the work carried out by Ciência Viva, not only in Portugal, but also in Europe and worldwide.

This meeting was followed by a second one with the Calouste Gulbenkian Foundation, which is an international foundation based in Portugal aiming to improve people’s quality of life through art, charity, science and education. Calouste Sarkis Gulbenkian, a philanthropist of American origin and who lived in Lisbon between 1942 and 1955, created the foundation in 1956. The Director of the Strategy and Planning Department Luís Lobo Xavier and the Deputy Director of the Strategy and Planning Department Margarida Espírito Santo hosted the meeting and presented the foundation, its programme, its accomplishments, its role since the outbreak of the pandemic and its strategy for the period 2018-2022. The meeting served as an opportunity to reflect on the tangible impact that the foundation has had on the Portuguese population and thus concluded the programme of the virtual visit to Portugal.