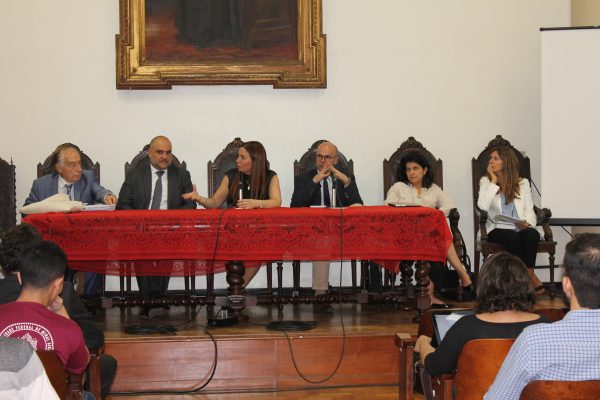 The Federal University of Minas Gerais; Faculty of Milton Campos; Pontific Catholic University and Dom Helder Camara Law School organized a conference entitled “International and European Security and the foreign relationship with South America” to discuss about understanding the perspectives surrounding the current geopolitical and legal configuration of the relations between the European Union and South America within the framework of the security policy adopted by international instruments reflecting the common positions adopted by both regions. Manuel MEDINA ORTEGA, FMA Member, participated in these events.

The “EP to Campus Program” has facilitated my participation in an international seminar on “Foreign Policy, Security and Strategy: Relations between South America and Europe” at the Law School of the Federal University of Minas Geráis in Belo Horizonte, the capital city of the State of Minas Geráis, Brazil, on the 18th and 19th October 2018.

In the context of the visit to Brazil I was also invited to deliver a lecture on the European Union Law on Refugees at the “Dom Helder School of Law”, a private university center in Belo Horizonte, and to meet with students and faculty of the Master´s degree in international law at the Law School of the Federal University in order to discuss the relations between the European Union and Latin America.

Three years ago, in 2015, I had already taken part in a similar joint program of the “EP to Campus Program” with the Federal University of Minas Geráis and the University of Itaúna, a private institution in the neighborhood of Belo Horizonte.

At the time of my first visit, the opposition parties had begun to take measures intended to impeach the president of the Republic, Dilma Rousseff, a member of the “PT”, the left-leaning labor party led by former president Luis Ignacio “Lula” da Silva. Shortly before my second visit to Belo Horizonte, the Brazilian courts of justice had prevented Lula from running again for the presidency of the country. Michel Temer, the successor of Rousseff in the presidency of the Republic, and one of the plotters who brought her down, was indicted for corruption charges while I was in Brazil in the month of October. My recent visit to Belo Horizonte took place in the interval between the first and second rounds of the presidential, congressional, regional and municipal elections. The second round should have taken place on the 29th of October after this article has been sent for printing. Thus, readers cannot expect to find fresh news on the electoral process when this article will be published. Opinion polls forecast a success for the extreme right wing candidate for the presidency, Jair Bolsonaro, a retired army captain.

Opinion polls also indicate that Lula´s PT will continue to be the largest political group in Congress and will keep a good number of city halls and State governorships. The electoral campaign was at its climax, while a small group of European and Latin American professors were discussing peace and security in the sedate atmosphere of the academic world. Latin America enjoys a privileged position in the international scene as an area of peace and common security. The relative instability of several domestic political systems in Latin American and the dominant position of the US in the American continent as a whole, does not prevent the Latin Americans from playing their cards judiciously in the international arena. One reason for this relatively peaceful international situation may lie in the fact that the Latin America governments are not exposed to the same levels of pressure on peace and security issues to which the European States are now being exposed due to the aggressive tone of Russian foreign policy, the ever present threat of Islamic terroris and the intensification of the migratory movements on its external borders. I pointed out this anomaly in my report in the panel on “The European Common and Security Policy and World Geopolitics”. Other participants in this panel were professors from Portugal (Isabel Cabrita), Uruguay (Diego Escuder), and Brazil (Flavianne Bolzan de Morais). Due to limitations of space, I cannot include in this short article the entire list of participants and the particular issues discussed in each panel. The Seminar covered the whole spectrum of issues concerning peace and security, including migrations, terrorism and the threats to the environment. I found particularly interesting the report by Prof. Enzo Cannizzaro, from the University of La Sapienza in Rome, on the contentious issue of “The responsibility to protect”. Before taking the plane to Brazil I had apprehensions about the situation I could find as the country was involved in an electoral process that had heightened the levels of political confrontation and economic uncertainty. In fact, during the few days that I spent in Belo Horizonte, the “Real” was devalued and the shares in the stock exchange fell accordingly, while political violence and street criminality continued at a high level. In this context, many young Brazilians are now looking forward to the professional chances that Europe may offer to them in order to improve their professional and vital expectations. Due to the fact that many Brazilians are descendants of Europeans who migrated recently to the new continent, they are entitled to acquire the citizenship of one or the other of the EU Members. The number of applications for the acquisition of the Portuguese citizenship submitted to the Portuguese Consulate in Sao Paulo was so high that the Government was forced to cancel the acceptance of new applications in that Consulate until next year.

The solution to the problems of unemployment and living conditions in Latin America cannot be found in accepting as legal immigrants all those wanting to come to this part of the world, especially when the anti-European political parties are using the arrival of immigrants to Europe as a rallying banner against European integration. On the other hand, since Christopher Columbus discovered five hundred years ago that there were new lands in the western side of the Atlantic Ocean, Latin America has received hundreds of thousands of European immigrants. In a globalized social, political and economic system, isolation is not the solution to the problems of poverty and inequality. We need to cooperate more closely with Latin America. The European Union should look forward to ways to establish new world-wide arrangements that may help to solve our problems and those of our brothers and sisters on the other side of the Atlantic Ocean.

In this context, we should be aware that Brazil, and the whole of Latin America, is endowed with a competent, hard working and well prepared new generation of university students and professors that have received education in our universities and research centers, and are thus prepared to work with us in order to find solutions to our common problems in a world which has shrunk considerably as a consequence of the technological revolution that permits a broadbased exchange of knowledge across the borders of the nation-States, old and new.