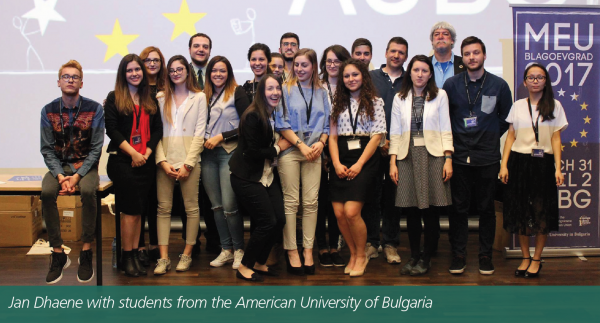 Jan DHAENE was invited to participate in a conference on circular economy at the American University of Bulgaria.

I saw the invitation of the American University in Bulgaria and I was interested in the subject: The circular economy. As former green politician but also as civil servant working on sustainable development, my attention was drawn. I was also intrigued by the fact that an American university was working in Europe, and the fact that I never visited Bulgaria before. I got the selection by the university only two weeks before the event and I had by coincidence my first week ever in the United States the week before. So I arrived in an American mood.

First I had to look up where the city of Blagoevgrad was situated. I never heard of the place before. The contact person was professor Jean Crombois and it turned out that he was also a Belgian citizen. So in the middle of the night a driver picked me up at Sofia-airport and brought me to the hotel where I arrived at 3 a.m. The first day in the afternoon we met the rector of the University and the provost. In the evening the opening ceremony of the Model European Union (MEU) was held, and I was keynote speaker on the subject : Circular Economy. The idea was that the students would play a simulation of the EP, the Commission and the Council, and discuss theCircular Economy Package (amended Directives launched by the real Commission in 2016 on waste, reuse and landfill etc.). The next they discussed the text in several Committees and I preceded the ENVI Committee.

The students played the role of MEPs of all the political groups; there where lobbyists in the building and the media was all around. It all ended in a triologue with Commission and Council and a final vote. In the debate the Brexit lead to heavy discussions. The students played their role very well and got emotionally and intellectually involved. You can find all this on facebook : Model European Union Blagoevgrad and on mine. It was the third time the American University in Bulgaria (AUBG) organized this model event, with the support of the Jean Monnet Fund. This is a model for all universities in Europe. On Sunday the professor took me to the Rila Monastery (UNESCO). The weather and food were excellent. I can highly recommend a visit to Bulgaria, the best kept secret of Europe.

Jan DHAENE during his intervention