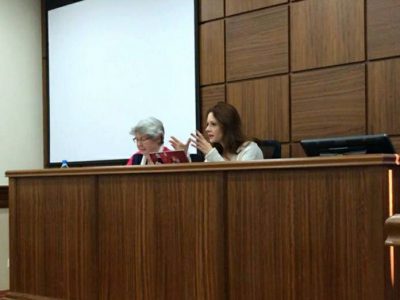 The University of Lancashire organized a series of activities with students and a workshop, with the judiciary and academics.

Uclan – the University of Central Lancashire in Larnaca – provides a unique and innovative model of university education which is both Cypriot and British at the same time. There are close links with Europe through Jean Monnet modules and the Erasmus+ programme. Not surprisingly, many students and teachers are of international origin. It is quite possible that an island on the extreme geographical periphery of Europe may be the ideal place to conduct such an experiment, and I consider it a great success. There was an open atmosphere, with a willingness to engage in debate, and a high standard of innovative new approaches. Impressive!

On the first day, the main event was debates with students on the campus. Various lectures were given in the course of the day, all of them very well attended. The main subject was European social and employment policy, including Juncker’s European Pillar of Social Rights initiative; Parliament’s working methods and the possible consequences of Brexit were also mentioned. The students were committed and well prepared.

On the second day in Nicosia, a round table with national and international judges was the main event. It was opened by the President of Cyprus’s Supreme Court. The European Court of Justice was represented by judge Anna Marcoulli. Here too, similar subjects were discussed: how can socioeconomic rights be promoted and protected in the current financial crisis? In the ensuing debate, the students called for the European Courts (in Luxembourg and Strasbourg) to protect citizens against the pressures imposed by the ‘trio’ and for a different political course. It was a lively debate, in which conflicting opinions were expressed.

In addition to the official subjects on the programme, a topic repeatedly raised was relations between the EU and Turkey (and more specifically the naval blockade prompted by the gas dispute, which was taking place at that very time).

I took the opportunity to go for a short walk in the Turkish part of Nicosia. I had already once visited the city some 30 years ago, when the UN was everywhere and it was virtually impossible to visit the north. Since then, much has changed, but it seemed to me that distrust and prejudice persist. This makes it all the more important for the EU to support projects such as Erasmus+.