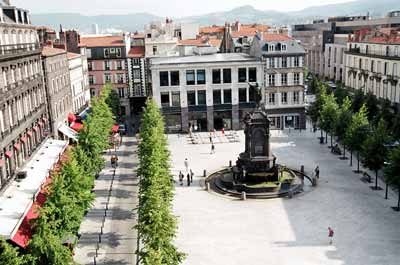 1) Lectures and discussions at the University

2) Participation in the first meeting of the international network of Michelin cities.

This was a clever combination of academic work and a big public event and the organiser Arnaund Diemer did a great work.

• The participants at the lectures at Clermont University were mostly students (often on Erasmus or other EU programmes and from various European countries) involved in projects or writing their thesis, thus providing an opportunity to present some of their work and discuss it with peers.

The fact that all presentations and discussions at the university were in English added to the international atmosphere of the seminar.

The issue of circular economy and which methods and tools could be used to develop a fair and encompassing system, providing for a growing world population without abusing resources and generating waste and pollution, was in the centre of the presentations. In particular interesting was the concept of ‘Circles of Sustainability’ presented by Professor Paul James from Sydney University. In this framework the sustainable development of cities is assessed in four domains: ecology, economics, politics and culture ; each domain being sub-dived into 7 fields, such as materials & energy, water & air; production & resourcing, labour& welfare; organisation & governance, communication & movement; engagement & identity, gender & generations. Assessment is made on a nine-step scale starting with critical sustainability to vibrant sustainability. Part of the seminar was dedicated to the future development of cities, showing scenarios of towers with vertical gardens and forest-like buildings, giving as well a chance to discuss the philosophical background of sustainble development of cities. My colleague Zofija Mazek Kukovič and I took part in the discussions and there were two special sessions dedicated to EU issues.

One was a presentation of ourselves and our work in the E.P. and one was an interview conducted by a retired scientist.

We were able to talk about programmes, budgets and in particular about legislation and how we see the future development.

As the participants came from different countries (Spain, Belgium, Ukraine) there was particular interest in questions of autonomy of regions and participation of regions in policies of the EU, and questions of accession and geopolitics; of course Brexit was an important issue.

I believe, that still after so many years it is important and necessary to explain the development and functioning of European legislation even to participants with very high levels of education.

• As part of the seminar was the first day of the 1st meeting of the international network of Michelin Cities ‘Sustainable City’, all participants and speakers were invited to the Polydome congress centre. Zofija Mazej Kukovič and I were taking part in the programme as experts. This gave the chance to speak about supportive European legislation and projects/programmes for sustainable cities and underline the importance of working together in Europe.

It has to be noted that there were representatives from all around the world, though I would suggest that the EP and the Former Members Association keep in touch as to encourage further co-operation.