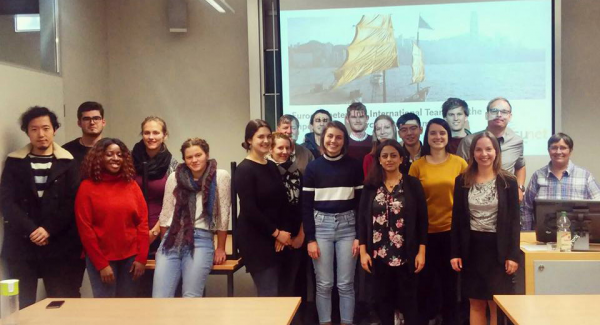 The Georg-August University of Göttingen organized a talk with Michael HINDLEY, FMA Member, on the topic of Law and Policy-making in the EU and the conequences of BREXIT for the EU and Great Britiain. The programm at the university included lectures and follow-up discussions and debates with students.

I was extremely pleased to receive a second invitation to the Euroculture Centre at the University of Göttingen which I first visited in November 2016. I suggested an update on my last year’s title ‘Can the EU survive Brexit?’ Not simply an example of English ‘tongue-in-cheek’ humour, but a warning that Brexit is not only an existential question for the UK, but also one for the EU.

Certainly the mood among the Masters Students in the three seminars I participated in was puzzlement and sadness about the UK leaving. There was some anxiety among a couple of UK students about their future status and questions from other EU students about their potential status post Brexit.

My last year’s visit coincided with the news that Donald Trump had won the Presidential race in the USA. That news was met by the same sadness and puzzlement as the Brexit decision.

This year’s visit came in the wake of the German general election which saw a sharp decline in the popularity of the two major parties (CDU/ CSU and SPD) and the rise of the anti-EU nationalists, AfD. The fate

A group of students from the Georg-August-University

of Chancellor Angela Merkel, widely seen as a stabilising force in the EU, has become an anxious question. We are entering an increasingly uncertain period. The eastern EU states are increasingly sceptical, even hostile to EU policy made in Brussels; witness the widening resentment against EU asylum policy.

‘Europe’ is increasingly seen as the problem for nation states, not the solution to national problems – a point the ‘More Europe’ advocates from Brussels fail to grasp.

The gap in perceptions of ‘Europe’ looms large. In my experience of young people, like the students I met in Göttingen and others I have met at

home and on FMA guest lectureships don’t share this pessimism. So many of them have benefited from European wide programmes, they travel with ease and confidence. They are prepared to rise to the challenge of competition and opportunity offered by the EU.

However, doubts remain and indeed grow as to whether the EU is there for the benefit of all and not just for the quick, mobile, talented elite. Serious work ahead for the EU which demands less self-congratulatory propaganda and more applied reasoned persuasion.