A former member was invited to participate to the Summer Programme on “Parliamentary democracy in Europe”, which was devoted to Parliamentary Elections and Democratic Accountability in the Age of Populism. The event was attended by our member Enrique Barón Crespo. Here below you can read his report that was published on the September 2019 FMA Bulletin.

To wrap up the eighth edition of the LUISS Summer School ‘Parliamentary Democracy in Europe’, the topic for which was ‘Parliamentary Elections and Democratic Accountability in the Era of Populism’, on 19 July 2019, a conference was held at the University LUISS Guido Carli in Rome on ‘Euroscepticism and the “new” European Parliament: what will happen after the 2019 elections?’.

On account of its speakers, interest in the conference was high: former EP President Enrique Barón Crespo; Nicola Lupo, a lecturer at LUISS; and Jan Wouters, a lecturer at KU Leuven. Cristina Fasone, Director of the Jean Monnet Programme supported by the FMA, introduced subjects such as the challenges to be addressed in the next parliamentary term; the future role of Eurosceptic groups in Europe; the influence of Eurosceptic MEPs on the legislative procedure and interinstitutional relations after Brexit; potential opportunities for the Eurosceptics and nationalists.

When presenting his positive vision for Europe, President Barón Crespo pointed out that, despite the wide range of electoral systems had been used, turnout at the European elections had been high (+10%) and it was not the euro but the strengthening of borders that had been the focus of discussions: the values and principles of the Lisbon Treaty have been completely overridden by the ‘Fiscal Compact’. ‘The challenges ahead are: cooperation, immigration, the budget, foreign policy, defence and security, unemployment, climate change (to be tackled by means of a ‘Green Deal’), and trade agreements such as the recent EU-Mercosur agreement; but the real revolution will be to achieve gender parity, as new Commission President Ursula von der Leyen has said. And the codecision procedure is fundamental in a European Parliament that is increasingly politicised, as reflected in inappropriate calls for voting by secret ballot, and which the British do not seem to want to leave, having continued to play a key role in the election of Parliament’s President and in the Committees’. 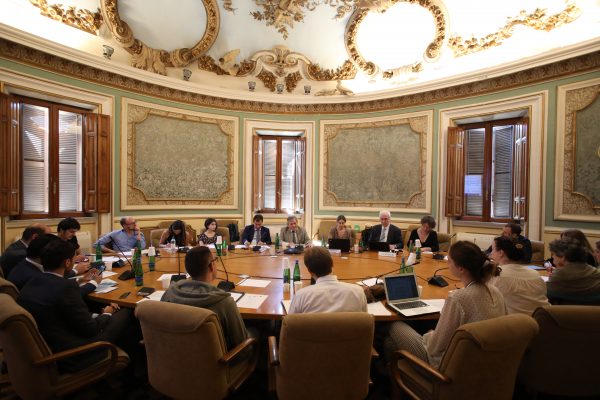 All the speakers noted the Eurosceptics’ desire to obstruct integration of any kind, by slowing the pace of reforms and decision-making, and considered how majorities would be formed, depending on the subjects under discussion in the European Parliament, during a term which would be anything but boring.

After the conference, we took part in the General Assembly of the Centre for Parliamentary Studies, chaired by Andrea Manzella, who in his address spoke of the unpredictable phenomenon of emotions-based populism and – as he stated in Il Parlamento europeo, una introduzione (The European Parliament: an Introduction), which he co-authored with Nicola Lupo – he believes that a sovereigntist presence in Parliament is ‘useful, if not essential’ because it provides ‘internal opposition to the system’. It is a minority which can stimulate a response and is not a hostile force large enough to block European integration: it will, therefore, be necessary to step up joint action by the European Parliament and national parliaments to bring about parliamentary cooperation, as laid down in the Treaties establishing the European Union, where the sovereigntists are recognised as the official opposition in an internal European area. Marta Dassù, Director of Aspenia, shares these views. She believes that changing the rules is essential to prevent the emergence of entrenched policy positions that are not open to challenge, and that Parliament should be able to initiate legislation with a view to bolstering common foreign and defence policy, on the basis of the economy and security, and regaining trust in the Member States. Personally, I believe that the role of the High Representative of the EU for Foreign Affairs and Security Policy will also be decisive.