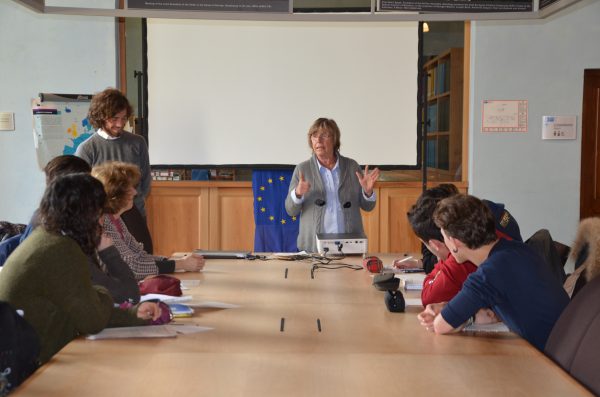 The European University Institute of Florence scheduled a simplified parliamentary debate for the students around the topic:“Temporary suspension of the Schengen Treaty”

“It has been a really marvellous experience. Dedicated persons involved, knowledge and friendliness. I would repeat any time.” By Barbara DÜHRKOP

INVITATION TO THE HAEU AND THE EUI IN FLORENCE
Mission report

Early March I had the honour to be invited by Dieter Schlenker, Director of the HAEU, to participate in the activities of the Historical Archives of the European Union (HAEU) and the European University Institute (EUI) on the 21st and 22nd of March. I agreed with Mr Schlenker to participate in all activities, which he deemed useful. My programme started in the morning of the 21st on the Villa Salviati site of the HAEU, with young students 11 to 14 years old within from an educational project to deepen students knowledge of the EU focusing on the history and functioning of the EU. The format was a simplified simulation of a European Parliament session led by the coordinators Alice Perini and Mateo Marenco. Due to the students’ age Italian was the working language. I was asked to intervene at the end of the meeting, in order to tell students about my first hand experience as a former Member of Paliament. The students were very active and I enjoyed answering their questions.

After a quick lunch in the canteen with Mr. Schlenker and some of his collaborators, I visited the archives. I was very impressed by the huge amount of documents and also, surprisingly, by the personal items donated by Members of Parliament. The archive is a real treasure! In the afternoon I had a meeting, with a high school class from the Salvemini Institute. My role was to act as chairwoman of the Civil Liberties committee. The topic to discuss, the temporary suspension of the Schengen Treaty, was introduced by the “chair”. The introduction was followed by a brainstorming session with the students making them aware of the policy issue and the different points of view. Then students were divided into four groups each of them representing a political party: GUE/NGL, EPP, EFDD and S&D. Each group was supplied with a paper simulating the main positions of each group in the EP debates. The Chair presented a Proposal of Resolution based on a simulated proposal of the Comission: “Temporary suspensión of the Schengen Treaty in the European Union and the consequent restoration of border controls at the national frontiers . A long discussion followed whether to approve or reject the Commission’s proposal.

Finally the proposal was rejected and the “committee” withdraw into the marvellous garden of the Villa Salviati, where the political groups amended the Commission’s proposal. Finally a common position was adopted and the meeting ended 1 ½ hour overdue. A great experience with a fantastic interaction! Next morning I arrived at the Badia Fiesolana, seat of the EUI, to a debate with a Gender Project Group. The group of 18 PhD students 6 different nationalities, and the debate was very lively with a variety of arguments while analising the gender situation in the EU and specific situations in Member States and in the USA, since one of the students was American! The meeting adjourned at 12.30 but the debate continued during lunch in the canteen. This was my first experience in the EP to Campus programme, and it has been incredible satisfying. I’m convinced that the programme completely fullfills its goal. A cordial thank you to all involved.