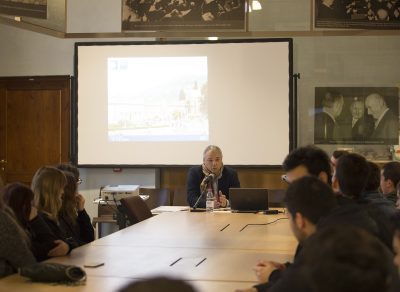 The experience that our organisation enabled me to enjoy in Florence was to my mind remarkable both because it was so well managed and because the audience succeeded so excellently in participating, putting forward proposals, and summoning up enthusiasm for the matters at issue. If meetings of this kind and this calibre had been held ever since we rst came together, then even those who now call themselves Eurosceptics would probably have become staunch Europhiles.

The topics covered – freedom of thought, freedom of speech, non-discrimination, making no prejudicial distinctions on grounds of race or gender, and other core concerns not just for a further experiment in coexistence, but also to countries encompassing a variety of institutional systems, languages, customs, mores, and religions – inspired the young participants not only to engage in discussion and respond with a modern vision, which I would describe as contemporary with the current historic moment, but also to make innovative, original proposals. I am sad that, because of its broad intrinsic scope and the shortness of the time available, I could not address the – before the Treaty of Lisbon – much-debated question whether the text of the preamble to the Treaty should cite the Judaeo-Christian and Periclean democratic roots of European civilisation.

What that would have involved, I believe, and might, I hope, involve in the future should the subject be taken up again is not merely setting down a historical reference, but exploring the genesis of profound changes shaped in the course of a development process and of the bene ts which these have brought to the whole of humankind and Europe in particular. Comparison of the discussion topics with the rst part of our Constitution proved interesting. The young people were able to grasp the underlying similarities, in terms of principles, between the essence of our Constitution and those of more modern constitutions and the Treaty of Lisbon. These are the subjects to which we shall probably have to draw the attention of all Europeans, the young and the not so young, in order to ensure that economic matters – the size of pizzas, say, or the quantity of sugar added to wine – are, whatever their importance, relegated to second place behind what should be the de ning elements on which to build – or rather rebuild – a society. The Florence-based European University Institute and the Former Members are working free of charge with public and private education institutions in all parts of Europe to foster discussion of the above topics in schools and the foremost cultural associations, enlisting aid offered at no cost by serving MEPs and university teachers from countries possibly lying outside the range of rst-hand experience. At a conference to be held at the end of each year, course participants will come together to discuss the elds that they have covered and select young people who, having been trained, will be ready to join the ranks of the trainers.