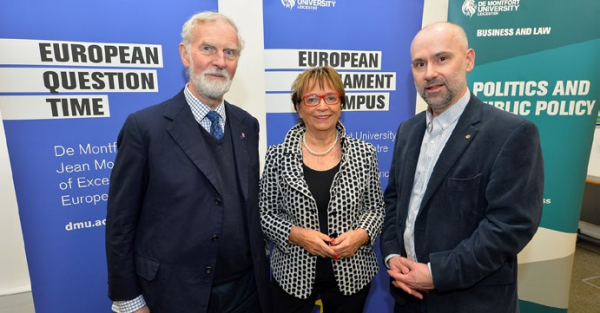 Within ten minutes of my arrival at de Montfort, the clock went back over fifty years: I found myself sitting in the front row at a lecture on the mathematics of fiscal stabilisers. Was I −oh, Lord! – having to prepare for an economics exam again? And then I was up myself to answer questions on the subject.

Contacts between students studying a topic academically and those who have had to apply what they have learnt in the practical world are useful to both sides. The problems of the Euro Area in combing a centralised monetary policy with devolved fiscal policies were clearly relevant to the fiscal policy class; and also to the next one on monetary policy. Attending academic lectures can also remind ex-MEPs of fundamentals which may have been forgotten over the years.

I had, as requested by the Former Members Association office in Brussels, prepared a written paper on the history and problems of the Euro. But it was not needed. Unsurprisingly, the focus of all the discussions, and in particular the general question-and-answer sessions, was Brexit. What was going to happen if and when the UK left the EU? Doris Pack and I struggled to find satisfactory answers. Almost all the students and staff appeared to be Remainers, and it was difficult to deny that no arrangement outside the EU could possibly be as good as not leaving in the first place.

But then there was a bewildering array of options, ranging from EEA membership plus Customs Union (probably, in due course, leading to an EU return), to a cliff-edge crashout next year. It was necessary to explain that nearly everyone else, and almost certainly the UK government, were as much in the dark as we were.

The university had issued us with an envelope-full of vouchers for use in the various canteens on campus, which I mostly spent on coffee. But we were also entertained to two excellent dinners in town, after the first of which we went to the site of Richard III’s burial and saw something of the old, now partly pedestrianised city. The de Montfort campus itself extends over quite a large area; and if there is one complaint we had it is that the local taxis seemed at a loss when trying to drop us off at the right building.

My visit ended, as it had begun, with attendance at two classes on special policy fields, both under the supervision of Professor Alasdair Blair, the university’s Jean Monnet Professor of International Relations, and overall organiser of the event. The first was on the CAP, a subject that has been endlessly debated and reformed over the years. I was able to recall the days of butter mountains and wine lakes, and even, before that, of the UK’s expensive deficiency payments system. Now we have the Basic (formerly Single) Payment Scheme, based on how much land you own. What, we wondered, was coming next?

Finally, after a short session on the British political situation – a subject for three days’ discussion in itself – I headed off back down the M1 to London.