A former member was invited by the University of Bath to attend a roundtable session assessing the Lisbon Treaty 10 years after its implementation and the challenges Europe has faced since the Treaty. The member also shared their expertise with graduate students during several lectures.

The roundtable session was attended by our member Margarita STARKEVICIUTE. You can find here below her article that was published on the June 2019 FMA Bulletin.

ROUNDTABLE ON THE TREATY OF LISBON IN BATH

The University of Bath received its royal charter in 1966. Over the years the College grew and moved from Bristol to Bath and today offers students a high-quality education, as University ranked at 6th place among top UK universities in 2019.

Totally 17 000 students study at the University of Bath, non-UK residents comprise around 30 per cent and female students account for 45 per cent of the total number. University has its own Sports Training Village and students have an opportunity successfully balancing sporting career with studying. According to QS Global World Ranking in sports related subjects, the University of Bath is among the ten best Universities in the world. University achievements in research also should be highlighted – 87 per cent of research is classed as world-leading or internationally excellent by the recent Research Excellence Network. Former MEP Margarita Starkeviciute upon request of the University of Bath took a part in a Roundtable Event on 10 Years of the Lisbon Treaty. The event was attended by Euromasters students, and two University professors also were making short presentations on impact of the Lisbon Treaty on EU security and Trade policy.

The goal of the presentation on Lisbon strategy was to clarify the powers of the European Union and types of legal competence: exclusive competence, shared competence and supporting competence. Public debates tend to exaggerate EU powers and students were interested to learn that the Treaty of Lisbon offers to the Member States a significant number of mechanisms for flexibility and an involvement of national parliaments in the decision-making process, while to everyone it grants participatory democracy in form of citizen’s initiative. 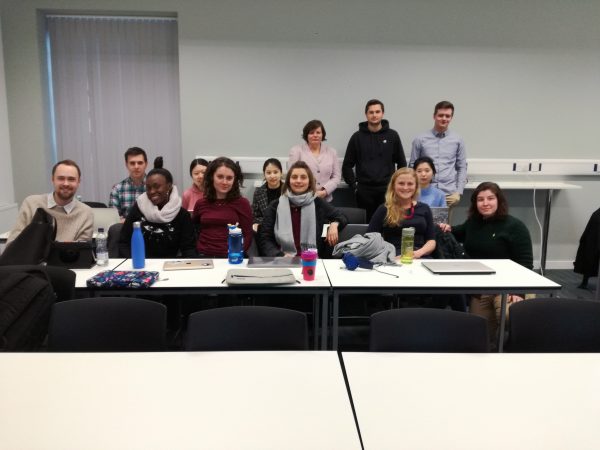 The roundtable included one hour a Q&A session. Majority of questions were about the European Parliament role in the EU decision-making process. A group of undergraduate students  expressed an interest to chat about European careers, so the afternoon was dedicated to a student-question driven session on the subject. Students were well informed about EU wide youth programs and consider them as relevant and useful. They got some more information on the posts open to young people at the different EU institutions and agencies.

On Tuesday a Master’s class in a module on International Trade was attended not only by the UK students but also by foreign students.Students were keen to learn about trade in digital services, use of new  technologies like blockchain in trade, protection of privacy. It was noted that obligation to protect privacy as a fundamental right and creation of a level playing field for technology companies could be achieved by setting a new policy framework in international negotiations.

EU cities fair and ethical cities award results were presented as an example of how new policy can change the life of developing nations. The leading in this field EU Cities have a special policy that includes procurement, establishing long term relations with partner cities and regions from developing countries and citizens’ education in fair trade programs. That creates a framework for maintaining direct contacts and promoting fair trade.

This policy allows ensuring more efficient aid programs to deprived regions and cities in Africa, Asia and the Americas. During Q&A session students wanted to learn more about MEPs experience in international negotiations. A visit was very successful thanks to the well  prepared program by Dr Maria Garcia a representative of the Faculty of Humanities and Social Science at the University of Bath and FMA.