The University of Zagreb organized in March an event which consisted on lectures for undergraduate students attending course Commercial Law within the BDIB (Bachelor Degree in Business) Programme in English and Commercial Law and Law of International Trade in Croatian.

They are citizens of the last country, in chronological order, to join the great family of the European Union. And yet the interest, enthusiasm and preparation I found in the days of meetings with students and lecturers at the oldest, most prestigious university of Croatia, are a sign that integration is already a reality. The world-renowned University of Zagreb, with its 28 faculties and an impressive range of courses, has always been very active in promoting synergies and activities with international universities and institutions. Against this particularly positive and dynamic background came my visit as part of the ‘EP to Campus’ programme which, moreover, took place within a few days of the celebrations in Rome for the 60th anniversary of the EU Founding Treaties. This was an important time for the leaders of the 27 EU states to take stock and, working together, to take on some new joint challenges.

The meeting with the students, in a packed chamber, was truly stimulating; together with the lecturers Zvonimir Šafranko and Kosjenka Dumančić, we spoke about the role of the European Union as an autonomous entity in the international arena, in a debate which was obviously influenced by current EU political events that are changing and redefining some aspects. We discussed, with students of the Faculty of Law, the legal framework for the European Union’s action as an autonomous entity and the difficult balance between the foreign policy requirements of each Member State and common requirements. At another meeting, at the Faculty’s ‘Europe Point’, we addressed issues that were more closely related to the events of recent months, in particular the challenges we face in relation to the new international situation: Trump, Brexit, populism and immigration were some of the issues touched upon in a debate in which the students interacted and participated. We also had an interesting chat with the editorial staff of the Faculty newspaper: we discussed the function of the European Parliament in the light of recent regulatory innovations and, more generally, the role and daily activities of a Member of the European Parliament during his or her term of office in Brussels and Strasbourg.

It was really a wonderful experience for me, in a Zagreb that is particularly beautiful in this season. My hope, also in view of the atmosphere I found among the students in Zagreb, is that on this basis of sharing and participation there may be a new spring for our European Union. 60 years ago it was an ambitious and far-sighted dream of the founding fathers; today it is a tangible reality that needs to be strengthened and improved, but which has ensured decades of peace, prosperity and development. 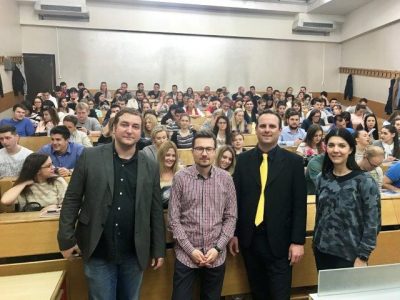