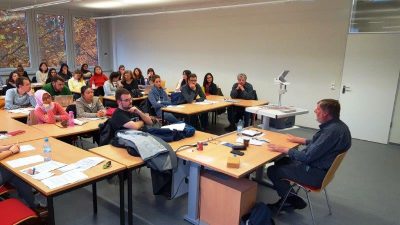 The University Gottingen organized a lecture followed by discussions and debates about the EU integration and about the role of the institutions in the EU and their power.

When the Euroculture Centre at the University of Göttingen in Germany invited me to give seminars on the post-EU referendum situation I was asked for a title. I suggested ‘Can the EU survive Brexit?’ Not simply an example of English ‘tongue-in-cheek’ humour, but a warning that Brexit is not only an existential question for the UK, but also one for the EU. The fact that the largest continuous democracy in Europe should choose to leave should provoke some radical self-examination in the EU itself. The stark fact is that 52% of participants in the UK Referendum did not feel that the EU can be reformed and that Britain’s future should be outside the EU. Very few – if indeed any – advocates of ‘remain’ campaigned endorsing the EU as it is. Many like myself campaigned to stay in and to reform the EU. It is the failure of the EU itself to reform, which has contributed significantly to this crisis.

Certainly the mood among the Masters Students in the three seminars I participated in was puzzlement and sadness about the UK leaving. There was none of the exasperation and vindictiveness that some continental public figures express. On the morning of my second day the news came through that Donald Trump had won the Presidential race in the USA. The news was met by thesame sadness and puzzlement as the  Brexit decision. The complacency of the ruling elites has blinded them to the rising tide of resentment amongst the so-called ‘left-behind’ who trust appeals to nationalism more than appeals to international solidarity. Clearly, the ground is shifting under the feet of the political elites who had haughtily assumed they were acting in the best interests of the people in the name of ‘Europe’. But the ‘Europe’ the EU was designed for, no longer exists.

Continental Western Europe emerged from the cataclysm of the Second World War with a simplistic slogan of ‘national bad, European good’ and far too long this sense that expressions of national sentiments are inevitably anti-international, even dangerous, has prevailed. It has certainly left the field open for the extreme right to present itself as representatives of ‘the people’. For Germany particularly this is a challenging time. Germany has successfully achieved rehabilitation through Europe, aka EU. It has foregone over national interest for the ‘greater good’.

Brexit will clearly mean that France will bind itself ever more closely to Germany. Much of the initial impetus for creation of western European cooperation leading to the Treaty of Rome came from the French political elite deciding to pursue French interests through Europe. A very brave decision at the time, but no longer an idea shared by large numbers of French voters. And a growing Franco-German axis is bound to cause a rising resentment in the East, particularly the Visegrads, who already feel somewhat undervalued. ‘Europe’ is widely seen as the problem for nation states, not the solution to national problems – a point the ‘More Europe’ advocates from Brussels fail to grasp. The young students at Gottingen have the intelligence, perception and energy to cope – but they are more realistic and more truly international and beyond the clichés of Europe first – at least ‘Europe a la Berlaymont’.