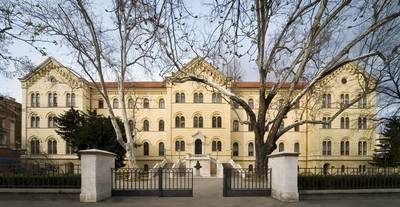 The University of Zagreb organized in November a conference for domestic market law students and European corporate law students. This conference focused on the domestic market, ‘The Four Freedoms’, the European Institutions and European corporate law. That is why the University wished to invite a specialist on these issues, Mr.Toine MANDERS, former MEP and FMA member.

By train to Amsterdam and by plain to Zagreb. Professor Kosjenka Dumancic emailed me that due to the arrival of Joe Biden, traffic and security would be very intensive and I arrived with some delay but save at the University. With Kosjenka and professor Dr Hana Horak, we discussed my programme. On Thursday the professors were presenting their book ‘European market law’ and I was asked to give some comments. A better knowledge will create an advantage in futural negotiations and procedures so it is for their own sake. On Friday I had my lecture about: ‘Will Europe be a global player or to be compared with the Titanic? We are at a crosspoint of history now ‘

The EU organization structure was fitted for 6 member states and not for 28. At the beginning Europe was all about agriculture and economy and not about the real politics. The ECJ is often deciding on political issues via case law, because our political leaders always are sliding the “hot potato”. This is a weakness of Europe and therefore we need change. Thanks to Mr Wisse Dekker (ceo Philips 1986) representing the European Industries in Brussels, who demanded a single market and a single currency, the single market and the euro was created in 1992. It worked quit well until the Euro crisis and now Europe is facing even bigger problems, like terror and refugees. Nowadays, in most member states, Europe is bashed by people who are afraid for the future. National politicians are confused, because they have to face the upcoming nationalistic parties to compete with them in the elections. Their dilemma is: To win the elections or to save Europe. The UK is the fi rst member state to organize a referendum. Will there be a Brexit? Who will follow? At least we will know the impact of stepping out. It is too easy to bash Europe, but the proof of the pudding is in the eating. I believe very strongly that there will be another outcome for Europe.

With the war on terror and a non-ending stream of refugees we need clear decisions of our leaders. What will be our future? We discussed some possibilities. There is a need for a strong organisation structure which is fitted for 28 member states and ready for the future. Instead of working on economic legislation, like labels for textile products or curved cucumbers, or agricultural policy, the EU should focus on more political issues. Our conclusion was that the EU could function better as the United States of Europe with a federal government and 28 member states.

The core business should be:
1. Economic and monetarian affairs.
2. Common defense and foreign affairs, including border control and immigration.
3. Environment

The member states are sovereign for all other issues. When there is a cross border friction, the ECJ will decide. This might help the EU to be a global player in the future too and to continue the thoughts of Wisse Dekker. Afterwards the two professors invited me for a nice dinner in the best Italian restaurant of Zagreb. The whole event was so intense that we promised to meet again.