FMA President, Hans-Gert Pöttering attended an international conference marking Simone Veil’s life; to discuss her impact on French and European politics and contribution to key societal issues of our time.
The event also served to unveil the new title of the Centre for the Study of Politics and Society (CSEPS), which became the ‘The Simone Veil Research Centre for Contemporary European Studies’.

The international conference was attended by our President Hans-Gert Pöttering. Here below you can read his report that was published on June 2019 FMA Bulletin.

The Centre for the Study of European Politics and Society (CSEPS) of the Ben Gurion University in Beersheba, Israel, has decided to adopt a new name in honour of the late Simone Veil.

As of the 2018 academic year, CSEPS has taken on its new name of ‘The Simone Veil Research Centre for Contemporary European Studies.’ The Research Centre’s new name was officially unveiled in an international conference, from the 8th to 10th of April, that commemorated Simone Veil’s life and legacy in European politics. The FMA President Hans-Gert Pöttering attended the conference and was asked to give the students some insight on the life and political career of Simone Veil. Dr. Hans-Gert Pöttering, personally voted for President Simone Veil in 1979, when he was a newly elected member of the European Parliament, told the panel about his personal experiences with the esteemed politician. The two former EP Presidents shared their views on a unified Europe and the important role of a strong Franco-German relationship. 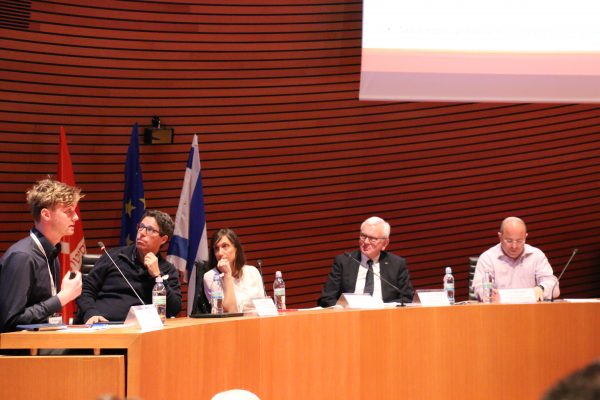 In 2010 Simone Veil and Hans- Gert Pöttering collaborated on writing and signing an editorial on the Franco-German relation for the German and French media: “Germany is fundamentally committed to stability, while France proposes ‘economic governance’. The two points of view are complementary and lead to the defence of both the stability of the euro and the social market economy (a term of German origin, Soziale Marktwirtschaft) as defined in the Lisbon Treaty, to defend the competitiveness of our economies and the security of our jobs. To this
end, France and Germany will have to put forward joint proposals for political and economic strategy” they wrote together.

Dr. Pöttering also participated in a panel discussion on ‘The European Parliament since 1979: Actors, Issues and New Developments’. The panel was chaired by  Professor Sharon Pardo, a senior Researcher at The Simone Veil Research Centre. The other speakers were Professor Dani Filc, Dr. Sarah Kahn-Nisser and Dr. Maurits Meijers. The panel discussed the evolution of actors, issues and new developments in the European Parliament since ‘79.