The University invited a former Member to participate in a conference on “Democracy without liberalism – dealing with populism in the EU”.

The Congress was attended by our member Gyula Hegyi. Here below you can read her report that was published on the December 2019 FMA Bulletin.

DEBATES IN CLUJ:
Report on the Conference in Babes- Bolyai University

Babes-Bolyai University (UBB Cluj-Napoca) is one of the biggest universities in Romania. Around 41000 students study there, making Cluj a flourishing, youthful city. This university, commonly known by its abbreviation ‘UBB’, works closely with the European Parliament and the Former Members Association (FMA). I was invited to give three lectures on 16, 17 and 18 April 2019 as part of our joint programme. As I was invited to Cluj just before the European elections, I obviously had to concentrate on the opportunities and risks associated with those elections.

I was initially a little surprised to be asked to give three long lectures on three different topics, but the presence of so many young students (40-60 on the different occasions) and the warm welcome of the assistant professors made it a rather easy task. The title of my first lecture was ‘On the importance of the European Elections’. I spoke about the importance of the European Parliament as the EU body that represents EU citizens and explained its role in the EU decision-making process. After my lecture, the students asked many questions concerning the danger of populism and the chances of the pro-European and the Eurosceptic forces. It was very inspiring to discover that all the students were pro-European and to hear them condemn the extreme nationalist tendencies in Romania and all over in Europe. Of course, as a former Hungarian MEP I was also asked about the influence of Viktor Orbán and tried to answer correctly. My next lecture on ‘Democracy without liberalism – dealing with populism in the EU’ was a direct follow-up to the first one. I tried to point out that we can combat illiberal tendencies, but that it’s impossible to do so without a fair and sound social policy. The main source of populism is a widespread fear of poverty and social and economic uncertainty, and the feeling of being neglected by the traditional political parties. It’s not enough to condemn populism: we should also fight for a Social Europe. 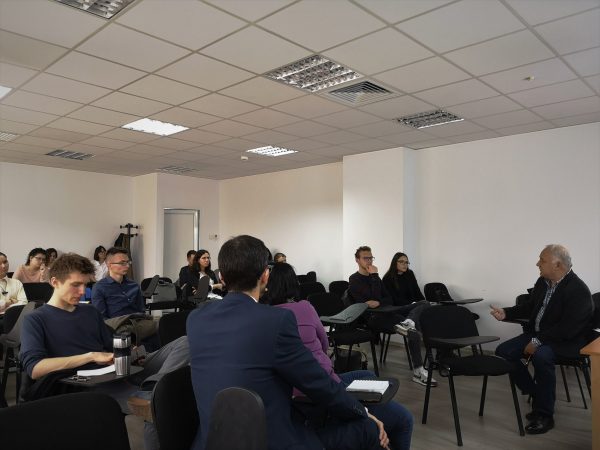 Some students did, however, defend capitalism and condemn any kind of socialist tendency. We had an enjoyable discussion on the role that Member States and the European Community have to play in balancing economic freedom with social justice. On the third day, I held a workshop on ‘Career opportunities in EU studies’. Given the importance of the topic, I made some slides to show the students all the websites that provide information on the various EU-related scholarships, trainee programmes, volunteering opportunities etc. I also spoke about the role of MEP assistants and the FMA’s own trainee programme. The students seemed to be really interested in participating in one of those programmes to complement their European Studies degrees.

I also met Professor Mihaela Lutas, the Vice Rector of the UBB, and we agreed that our joint programmes are extremely important. I thanked him for his hospitality and we agreed to continue the partnership between the FMA and the UBB.