The University invited a former Member to participate in the 3rd International Conference on European Financial Regulation (EUFIRE). The attendees were academics, researchers, students, practitioners, policy makers, business and civil society representatives interested in the topic of EU financial regulation. The Conference was attended by our member Birgit Daiber. Here below you can read her report that was published on the September 2019 FMA Bulletin.

A visit to the Easternmost University in the EU:
Report on the 3rd International Conference on European Financial Regulation (EUFIRE)

The Alexandru Ioan Cuza University in Iasi is not only the easternmost university in the EU, it is also the oldest in Romania. It was founded in 1860, and many of its buildings date from before the First World War, when Romania was rich and could afford to be ostentatious. The 26000 young people who study here do so in a very special atmosphere. The university has not only a large number of halls of residence, restaurants, parks, libraries, secondhand street bookstalls (people still read in the old-fashioned way beside the large IT faculty) and a beautiful botanical garden, but also its own hotel for academic colleagues who come to visit. The university maintains an active international exchange programme and encourages its students to join the Erasmus Programme. The teachers say that 8000 of its students have already taken part since its inception. The 2-day campus seminar was organised by the Faculty of Economics and Business Administration as part of the university’s ‘Europe week’ and was coordinated by Professors Irina Bilan and Marius Apostoaie. Nearly 100 students took part. The overall theme of the seminar was European Monetary Union. 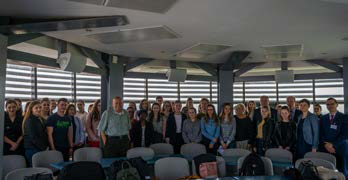 My presentation was about the history of monetary union, which was established as the sole, highly-specific project in the triad of monetary, economic and political union under the Maastricht Treaty. Of particular interest to the students were the fiscal regulations introduced during and after the financial crisis in order to stabilise the single currency. There was harsh criticism of the fact that the regulations remain severely underpowered and that the international fiscal situation is still in a critical state, particularly as a result of the enormous growth in shadow banking. There was a great deal of well-informed interest shown not only in monetary union but also in European democracy, with the European elections approaching.

So what is special about European democracy? Is it the fact that the European Parliament now has considerable power which, however, is in the form of co-decision rights, so that the Council of Ministers still holds the reins? Or that decisionmaking – including in Parliament – is always constrained by the need to compromise? How far did this Parliament have to come before there were direct elections, and how many long and bitter debates were there before it became what it is now (and the debates are by no means finished)? The lively discussion wound up with a move to convince the students that the unfinished nature of the EU as a construct and the fact that this Europe always was and still is a work in progress is precisely the reason why they should devote time and attention to it in large measure.