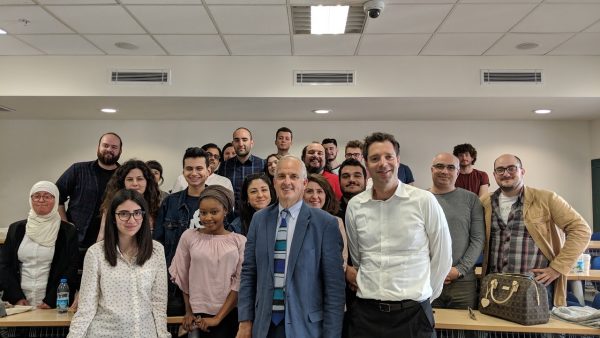 The event had as its main theme “EU Environment and Climate Policy” and how the EU institutions work in practice and what factors shape EU’s decision-making (concrete cases, e.g. EP-Commission relations, EP-Council negotiations, party politics in the EP), or the EU’s environmental/climate politics, or EU-Turkey relations.

It would be near impossible not to be impressed with Izmir. Situated in western Turkey on the shores of the Aegean Sea, Izmir takes its name from the Amazon Queen Smyrna. Today it is Turkey’s third largest city – after Istanbul and the capital Ankara. It is a young and dynamic place (almost half of its population of 4 million are under the age of 30) with a public transport system that works well including a fast-developing eighteen station metro. Historically, Izmir has been home to many different cultures and religions, from the Persians and Ancient Greeks, to the Romans and Ottomans.

Today, it is also home to the Izmir University of Economics (Izmir Ekonomi Üniversitesi) which was my destination in May on behalf of the Former Members of the European Parliament. Professor Dr. Alexander Bürgin had invited me to speak with his students about issues ranging from EU foreign policy and Turkey to the future of Europe after Brexit. Izmir University has some 8000 students and is part-housed in a former luxury hotel building!

Many of the university’s courses are conducted in English and almost all the students I met spoke the language fluently. The university has Erasmus Plus agreements with some 168 universities spread across 26 countries in addition to academic cooperation protocol with another 41 universities. My talk to Professor’s Bürgin’s PhD students was on EU governance and procedures. We discussed preparations for the 2019 elections and ways in which the EU might engage more closely with its citizens. It was noted however, that many surveys show the EU’s policy making to be closer to the aspirations of its citizens than those of many national governments.

My stay in Turkey coincided with the Supreme Election Council’s controversial decision to order a re-run of Istanbul’s recent mayoral election over alleged irregularities. Despite this, in discussion with the MSc students, I expressed optimism for Turkey’s future relations with the EU. Turkey, certainly Istanbul and Izmir, seem economically as advanced and European in outlook, as many other cities in the EU. True, there are some serious issues to be addressed but it would be foolish for us to close the door on Turkey’s membership application at this most sensitive time. In my discussion with undergraduates on the European studies course, the debate inevitably concentrated on Brexit.

Former prime minister David Cameron’s naive decision to call a referendum in the hope of uniting his Conservative Party has spectacularly backfired. The British Conservatives are more divided then ever, the opposition Labour Party (my own party) confused to say the least and the country split from top to bottom. How the UK will successfully move forward in its relations with the EU are, at the time of writing unknown. Were the decisions to be left in the hands of the well-informed young people at Izmir University, who knows, we might make progress and reach more sensible agreements! And so, all too quickly, my visit to Izmir was over and I headed home, my mind full of positive images and memories.