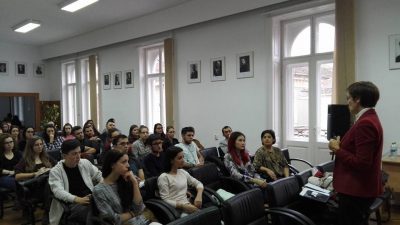 The University of Babes Bolyai, in Romania, organized an event about the European construction, its history and future strategy.

Thus, it wished to involve a former MEP as a keynote speaker, with whom it also organized more informal meetings with students.

Certainly, if you want to see a vibrant town, the rule is – go to a university town. And Cluj Napoca, the second biggest town in Romania, is no exception with its many NGOs, art galleries, festivals, start ups and the demand for personnel in the IT sector. There is even a bit of anxiety that the recruitment, the much higher salaries than the average and the impact on the real estate market might be a bubble, so rapid has been the developments. About 300 000 persons are residents in the town and it is host to roughly 80 000 students in all the universities. Also taking into account the increasing costs for accommodation a proportion of students commute to the universities from a long distance. The Babes-Bolyai university itself has 42 000 students in 21 faculties, 118 masters and BA programmes.

Out of the students, 1000 are foreign students, and the university maintains a wide range of MoUs with universities in other countries, in total 1500 MoUs. In university rankings B-B has scored very well, often best in the country, and fields like mathematics, social science and psychology are areas were performance is especially strong. Also public private partnerships are important and the co-operation between Porsche and the University was mentioned as a source of pride. During past centuries the town has been part of many empires and also been the capital of Transylvania. But it has also had a high influence of Germans/Saxons and a vibrant Jewish community, which was severely hit by the Holocaust. There is also a Roma population but the real size of it is difficult to tell. Hungarians account for roughly 15 % and one deputy Mayor belongs to a Hungarian party -the Mayor being now Emil Boc, a PNL politician and Prime minister from 2008-2012.

At times the relations between the linguistic groups have been tense also in the University and the way the university is administered has popped up intense discussions. There are Hungarian lines of studies in 16 departments and some German lines as well; however there are difficulties in recruiting personnel to the latter. I was not really able to get an insight into the current state of play. The programme and the lectures I was giving were organised in the Faculty of History and Philosophy, by the Department of Political Science and International Relations. The university also has other entities were EU law is studied, as there are separate European studies conducted. I gave lectures about the EU’s current crisis and around questions of migration, drawing on my experience as a Minister of Migration and European affairs. I think it should be noted that several EU presidencie and programmes for the Justice and Home Affairs like the Stockholm programme tried to have a broad perspective on migration supporting the Global Approach – where both promoting legal forms of migration, circular migration and combatting illegal migration formed a package. Also efforts were made to have migration partnership, but as such partnerships were not developed with big countries of origin. In 2015 Babes-Bolyai was the youth capital of Europe and the hopes were high that it could be one of the cultural capitals in 2021 – but lost after a very close vote. Still I hope that the new ideas developed for that project will prosper in the town in one way or another.