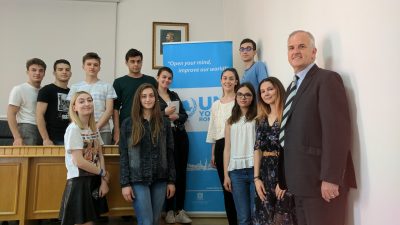 A trip to Transylvania in the Spring might send waves of fear through followers of Bram Stoker, but Cluj in Romania is a delightful place and Count Dracula nowhere to be seen, although one of his saying could not be more appropriate; “We learn of great things by little experiences.” My “little experience” was to represent former MEPS at the University of Babes-Bolyai in Romania’s third city, Cluj-Napoca. Cluj could not have been more delightful and my hosts, Alin, Mihela and Natalia could hardly have been more welcoming.

As an MEP, I served on the joint parliamentary committee for relations between the European Parliament and the Romanian Parliament for many years. Accession to the EU came in 2007 and I was proud to welcome many friends and colleagues as new Romanian MEPs. Returning to Romania after a break of several years and the changes are stark; the improvements obvious. With many signs showing support from the EU’s Regio fund it’s clear that the country has moved into the twenty first century.

Cluj itself has a proud Hungarian and Romanian history – reflected in the university being named after a celebrated Romanian biologist and a Hungarian mathematician, the two original universities having merged in 1959. Babes-Bolyai University has 40000 students and runs courses in several languages in addition to Romanian.

The subject of the two-day discussions for which I was the guest speaker was, ‘The EU Foreign Policy and the Global Politics of Human Rights’. My opening contribution was to first year under graduates on the role of the European Parliament and facing up to the challenge of migration. How the EU addresses the migratory pressures on its borders is one of the most important issues today.

Later my ‘key-note speech’ looked at the way the EUs international role has developed since the Treaty of Lisbon in 2009. Whilst the establishment of the High Representative for Foreign and Security Policy may have given new focus, far from a united response to international crises, to many the EU has stood by. This seems as true for the Russian interventions in Crimea and eastern Ukraine to the desperate situation in Syria and Palestine; the EU has appeared impotent, not knowing what to do or say.

On the positive side, the Union has been a force of strength in promoting global democracy by its emphasis on election observation and equally attaching human rights clauses to new trade initiatives. “We are strong, each in our purpose, and we are all stronger together,” to quote Count Dracula again.

A workshop on possible career opportunities in the EU institutions was demanding yet thought provoking. The talented and enthusiastic students from Babes-Bolyai have much to offer to Romanian MEPs and their government. Many questions were asked about the UK’s current and future position within the EU, post Brexit. Was the UK always destined to leave the EU or was the referendum campaign just a disaster? Will David Cameron go down as the most arrogant and incompetent British prime minister in history?

Will the UK live to regret its decision very soon?

After two very packed and eventful days it was time to say “la revedere” to all my new friends in Cluj. I’m sure I won’t be the last former MEP to visit Transylvania and I thoroughly recommend it!