The event is part of a series (Integration Club) organised by the University of Szeged in relation to European integration for students (undergraduate and graduate), university staff, high school students, young graduates, press and interested public.

You can find a presentation of the project here.

Mission report: SZEGED WAS WORTH A VISIT

Admittedly it isn’t easy to get to Szeged. If you go by plane, you land in Budapest, over 200km from Szeged, and if you take the train, the journey from Lake Constance can take some 15 hours. But it’s worth it: a beautiful city with a touch of Mediterranean flair and a neat and tidy centre with lots of space for walking and cycling and time to enjoy yourself. And students from across the globe.

Right at the start there was an interview with two young ladies from northern Germany, office apprentices who were spending a month in Szeged as exchange students. Asked why they had chosen that particular place, their response was refreshingly simple: they wanted to see a part of the EU which was less well known in their own country. They said they were charmed by the city and the people.

There followed a discussion in the university’s ‘integration club’ with young people from across the whole of Europe, with questions which were a million miles from the everyday trivia of the European institutions. Defending and improving human rights, perspectives for EU enlargement, and freedom to travel and settle abroad were among the issues raised. As expected, the role of the Hungarian government in the EU was also discussed, as was the increasing isolation from the 27 other Member States which the country might face as a result. Participants were unanimous in their view that the EU should place the common values set out in the Treaties above the selfish national interests of individual Member States in the forthcoming negotiations on the future financing of the EU. These values were also stressed in the context of migrants seeking in the EU a safe place from discrimination and persecution.

The following day we discussed the limits of European integration and the enlargement potential of the EU. The lecture took place in the Faculty of Law of the University of Szeged. Students from third countries – in particular from the Balkans – voiced their hopes that the EU would increase its efforts to ensure enlargement takes place.

At the moment it seems the EU is giving the impression of being overly concerned with itself and its internal conflicts. And we were reminded that the last major enlargement was in some ways still being digested and that there should be an internal consolidation of the EU before any further enlargement. An initiative such as the European Convention might give some impetus both to deepening the EU and to increasing its capacity for enlargement. Expectations in this regard fall on the European Parliament. I have a particular memory of two young women from Serbia and Kosovo who asked what they could do to help their countries join the EU…

It is to the credit of the ‘EP to Campus’ programme that events are also held away from national capitals. This is an important difference from most EU events organised by the in-country offices of Parliament and the Commission. It may be that the atmosphere in a university town at Hungary’s southern (EU) border is very different from that of the capital, for cultural and geographical reasons.

And it was clear that our young interlocutors really appreciated having a (former) Member of the EP to represent Europe rather than ‘Brussels bureaucracy’. 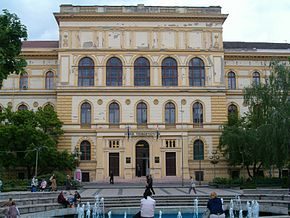