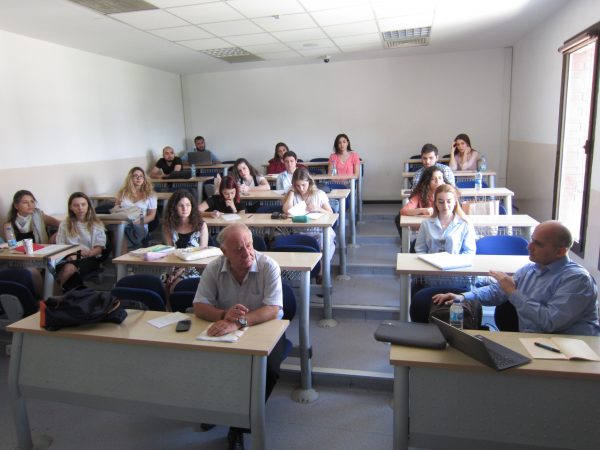 The event had as its main theme ‘The EU’s Environmental/Energy Policy: Achievements, Challenges and Implications for EU-Turkey-Relations’. Gyula HEGYI, FMA Member, participated in this event.

Izmir is a beautiful city situated along the Aegean Sea, with 4 million inhabitants. This progressive-minded city has six universities, and I was invited to the Izmir University of Economics (IUE). IUE is a private university with around 7500 students. My host was Assist. Prof. Dr. Alexander Bürgin, Head of EURAC, who has been awarded a Jean Monnet Chair by the European Commission in August 2015. (A Jean Monnet Chair is a title assigned to university professors with a specialization in European Union studies, including financial support for three years.)

I participated three different panels with 20-20 minute’s introductions, and I also tried to answer the many questions of the smart and well informed students. The first topic was The Promotion of Environmental Standards in the EU external relations. I mentioned that EU has some of the world’s highest environmental standards. The EU’s goal is to promote these standards and global sustainable development to their trade partners. The 2015 Paris Agreement on climate change is especially crucial for us, and the EU is driving force of its implementation.

However I also mentioned that in practice there are some contradictions as well, and in some cases the Third Countries have higher environmental standards. A student immediately mentioned the example of the natural heritage on which the Turkish regulations are tougher than ours.

The second topic was Making Cities Sustainable: Achievments and the Changes in the EU and Turkey. In Turkey cities accommodate over 75% of the country’s population, and the sustainable urban development is crucial for the fast-growing urban population. I spoke about the importance of public transport, clean air, renewable energies, green public procurement, heat waves and other issues. I also mentioned my own EP report on the thematic strategy on the urban environment. Following my interventions the other panelist, Mr Ümit Sahin from the Sabunci University Istanbul mentioned that the GDP growths in Turkey is mostly based on construction, and it is far from being an environmentally sustainable activity. He, as a green activist, gave a detailed picture on the environmental problems of Turkey, harshly opposing a project of a Russian-built nuclear power station. As it normally happens, some students were against the nuclear energy, others had more tolerant approach to it. It was interesting to hear that one student even traveled to Chernobyl as a tourist to see the spot.

The third topic was The Rise of Nationalism and Populism in the EU. Due to the political situation I refrained from criticizing the Turkish government but I spoke a lot about the nationalist and illiberal tendencies in Hungary and Poland. The students were rather well informed on the problems of these two countries. But I also underlined that to criticize the “Brussels” doesn’t mean automatically euroscepticism, and the integration to the Common Europe shouldn’t endanger our own national cultures. We had a lively debate on the Hungarian-Turkish relations and the exact meaning of the “nationalism”. Some students came from the EU countries, which also show the good reputation of the IUE. Professor Bürgin closed all the three sessions with useful conclusions. His whole course on European studies goes in English and we have to keep contact with this progressive university.

It has been really heart-warming to meet these talented, skilled young students, who share our values in Turkey. Let’s hope that they overcome the troubles of their rich and brave country!