SLOVENIA – UNIVERSITY OF LJUBLJANA – Per GAHRTON

Homepage EP to campus SLOVENIA - UNIVERSITY OF LJUBLJANA - Per GAHRTON

SLOVENIA – UNIVERSITY OF LJUBLJANA – Per GAHRTON 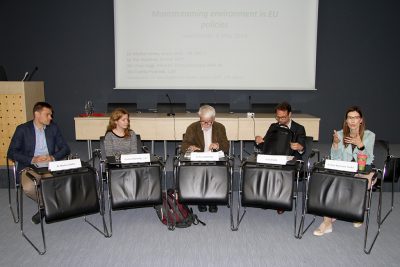 The University of Ljubljana organised a lecture for BA students in the introduction to policy analysis led by prof Damjan Lajh, meetings with student associations and participation in the Europe Week round table on EU’s environmental policy.

Per GAHRTON, FMA Member, participated in this event.

In mid-May I visited Ljubljana on assignment for the European Parliament’s former Members’ Association. The idyllic calm of the cafés along the Ljubljanica river was overwhelming – but perhaps deceptive. My visit coincided with the run-up to a snap election on 3 June: the third since 2011 and the ninth general election since the break-up of Yugoslavia. There have also been 20 referendums on everything from EU and NATO membership to the legislation on archiving, same-sex marriage and railway building. Was it wishful thinking, then, when a major Swedish newspaper referred to the country as “Friendly little Slovenia” (Svenska Dagbladet, 15 July 2011)? When I took part in a panel debate on EU environmental policy at the Faculty of Social Sciences, I came across an opinion that is often heard in Scandinavia: the EU is needed in order to tackle cross-border environmental issues, but the action it takes is too weak. I cited Wikipedia, which commends the EU for the Paris Agreement, but Panel of Speakers at the event of the University of Ljubljana notes that the EU’s leadership role in the area of environmental policy has been weakened. A briefing note drafted by the European Parliament’s research service lists the social dimension, migration, security and defence as issues that are being discussed with an eye to the future of the EU post-Brexit, but the environment is not mentioned (The Future of Europe – Contours of the current debate, European Parliamentary Research Service, April 2018, PE 620.202).

I found Uroš Vajgl’s contribution particularly interesting. Mr Vajgl, who has represented Slovenia in COREPER, the EU’s ‘secret centre of power’, maintained that the EU devotes less effort to environmental issues than it does to employment, for example. At lunch with Mr Vajgl and others after the debate, I was struck by their criticism of commercialism and general left-wing attitudes. Were these representative of the Slovenian people? According to The New York Times, the election on 3 June ‘tilted another European country to the right’. And it’s true that a right-wing populist party won with 25% of the vote, but a new centre-left group, Marjan Šarec’s list, came second, and the social democrats came third.

Despite the weak position that the Greens are in, I was asked to give a lecture based on my book, Green parties, Green future (Plutobooks, 2015). As a thank-you, a member of the audience gave me a book entitled The Slovenian Greens: From early success to long-time failure (Danica Fink-Hafner, Matej Knep and Meta Novak, Faculty of Social Sciences, 2015). Later on I showed the book to Igor Juriši ć, leader of Slovenia’s Green Party (Stranka Mladih), and his response was: ‘I haven’t got round to reading it yet, but unfortunately the title is spot on!’ In 1990, Slovenia’s Greens garnered 8.8% of the vote, 8 seats in Parliament and 5 ministers. In 2018, however, they didn’t manage to field any candidates under their own party name, cooperating instead with Marjan Šarec’s list. Fink-Hafner, Knep and Novak cite two main reasons for the Greens’ decline: first, it had been a mistake to go into government with such a new, weak party, and second, there had been too much sectarianism and factionalism, and too many defections. Slovenia is a good reminder that it is important for small parties to be very careful in choosing the right time to have a go at being in government. It also shows that the curse of sectarianism must be kept in check.

Our Slovenian hosts told us that it simply wasn’t done to visit Slovenia without going to Lake Bled, so my wife and I duly went there. To prepare, I read a French novel about a couple who visit the beauty spot. The blurb on the back promises ‘glimpses of a relationship which, despite the lovers’ good intentions, is doomed to fail’ (Clément Bénech, L’été slovène, 2013). I hope the novel isn’t predicting the downfall of ‘friendly little Slovenia’, but shows, rather, that the country’s future is in the hands of decent democrats after all.