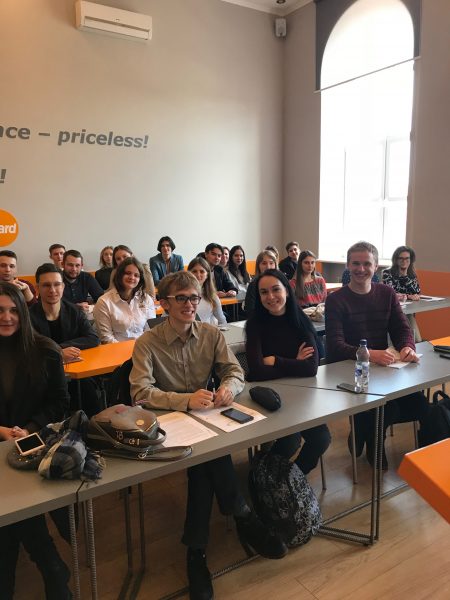 The Ukrainian Association of Professors and Researchers of European Integration together with the National University of Kiev Taraz Schevchenko organised a conference entitled “European Integration Processes in the 21st Century: Key Trends, Main Challenges and New Perspectives”.

The Kiev based Taras-SevchenkoUniversity in co-operation with Erasmus and their common Jean Monnet-Project organised a two days’ International conference on “European Integration Processes in 21st Century – Key Trends, main Challenges and new Perspectives” on 26/27 March. Speakers from universities of United Kingdom, Portugal, Canada, Poland and Italy have been invited. I have been invited on behalf of FMA. About 70 students, mainly involved in European Studies, took part in the first afternoon debate on March 26th. I was asked to give an introduction into history and relevance to the current situation of European integration. My first challenge was to find some examples avoiding the danger to be too shallow. I choose the following two: “EU’s international trade policy” was the first, followed by “the rule of European law and common values in democracy”. Since the students have been very aware of EU’s problems with Ukraine’s direct neighbour Poland, they asked many questions on the rule of European law, decision making processes and European understanding of democracy. I explained that one of the basic experiences in European Policy is to accept the necessity to compromise (even in one’s own political family). Here the students ask the grave question, hanging like a black cloud above all debates in Ukraine: How to find solutions for the war in East-Ukraine and for Crimea.

I couldn’t give an answer to this 1-Million-Euro question, but at least there has been no negative reaction when I mentioned that in the end there would be the need to find compromises. Another issue raised by the students was nationalism. Since EU-law rules above national law, the students felt inclined to ask if there is not the danger that citizens may loose their national identity? This led to discuss the principle of subsidiarity and the chance to develop a genuine European identity – not dominating national identity but changing it and adding a new dimension of common values and goals. The difference between national identity and aggressive or even violent nationalism was underlined. All in all the more than three hours discussion showed the deep desire of the students to become part of the European Union. At the international conference on 27th participated a lower number of Ukrainian students and more CEOs from EU related organisations and professors from universities.

The conference concentrated on different fields of European Politics, especially Environmental Policy, Law-making processes and questioning the Competence of Europe in actual conflicts. A specific part of the session was dedicated to the presentation of results of an inquiry in UK on letters in shaping the mass media before the referendum on Brexit. The inquiry shows 97% yes to Brexit in populist media while only 46% could be found in more neutral papers. Unfortunately this inquiry was carried only after the referendum. Two young researchers from the Ukrainian “Content Analysis Centre” gave a lecture on “the role of EU in the events highlighted by the major Ukrainian press”. My role in this part of the conference was to talk about the heavy storms which are threatening the Union since the outbreak of the Financial crisis in 2008. I referred to the refugee crisis, the deep internal conflicts with some member-countries not willing to accept European rule of law and the upcoming international trade conflicts proving so far the rather robust survival capacity of the Union. My closing remarks emphasized some aspects of new ideas actually developed by the EU-Commission and also by the French President Emanuel Macron.