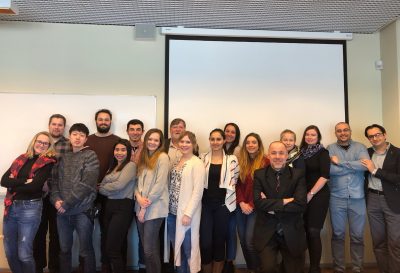 A cold Tallinn offered a warm welcome from my hosts when I visited Estonia’s lovely capital in March. Through the good offices of FMA, I was invited by the Tallinn University of Technology (TTU) to talk about EU foreign relations but also to discuss, with students and faculty, Brexit. My interlocutors clearly follow the debate on Brexit in the UK with attention; an attention tinged with concern about future relations between Estonia and UK under the auspices of EU Higher Educational Cooperation. Although the UK government has indicated a willingness to contribute financially to such programmes as a way of ensuring participation, the negative is that as in other spheres, UK will be “taking and not making rules”. The UK has been a major influence on the shaping of ERASMUS and research cooperation and its knowledge and experience would be missed. Students worry that study in UK could become more difficult and staff are concerned that recruitment from UK as well as their chances of posts in the UK could become problematic.

I also gave a lecture on China’s ambitious “Belt and Road” programme to Masters students of International Relations.

Ostensibly, this is a giant infrastructure plan, initially based on the revival the old Silk Road, from China, through Central Asia and on into the Middle East and Europe. As such it conjures up romantic nostalgia for bygone days of explorers and traders, East to West, and West to East. However, it is also much to do with Sino/Russian rivalry for national energy resources in Central Asia. Additionally, China is worried that though the Coastal strip of China is booming, there is little evidence of a “trickle down” effect to the distant inland provinces. Lastly and not least, China now has massive over-capacity in steel, coal and cement; just the basic materials for a vast transport infrastructure programme envisaged in “Belt and Road.”

My hosts kindly arranged to visit some of Tallinn’s much lauded e-centres, TTU own innovation

Estonia has invested much energy, resources in new technology and the results are truly impressive. I well remember taking a portable typewriter for my Strasbourg and Brussels offices in 1984, only for the typewriters to become quickly redundant. Now you can get an entire communications system on your smart phone. When I expressed my own scepticism about cyber-security I was met with optimism. Estonia has suffered and still fears cyber-attack from Russia, but the participants in the e-centres enthusiastically pointed out that research and development into cyber-security was in itself a motor for economic activity.

Membership of the EU has been taken up with gusto in this small Baltic nation. It was refreshing to see such optimism in Estonia.