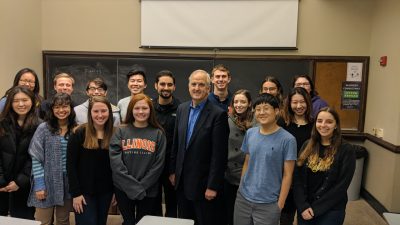 The University of Illinois at Urbana-Champaign EU Center (EUC) organized two major events: “17th Annual EU Day”, a celebration of transatlantic relations and strives to promote a better understanding between the peoples of the US and the EU also featuring a roundtable discussion on the EU; “Researching and Teaching the EU: Best Practices and Current Trends in EU Scholarship — A Working Conference”, an annual conference that brings together college faculty with the aim of increasing research on and teaching of the EU at universities and four-year and two-year colleges in Illinois and the American Midwest.

VISIT TO THE UNIVERSITY OF ILLINOIS
Mission report

There can’t be many universities anywhere in the world, with their own airport. The University of Illinois at Urbana-Champaign is one such institution. Situated some 220 km south of Chicago, the university is one of the largest public colleges in the USA with nearly 50, 000 students. The sprawling, yet modern campus seems to engulf just about the whole of two small towns, Urbana and Champaign in addition to being home to a very successful EU funded Jean Monnet institute.

It was their invitation, to attend the institute’s twentieth anniversary conference, on behalf of former MEPs, that saw me land, late one cold November evening at their own, modest but convenient airport!

After a long trip via Dallas, some 1500 km to the south – I have never understood why it is cheaper to take two flights and fly over your eventual destination hours before you reach there – I was met at the airport by Sebnem Ozkan, the centre’s associate director and one of my excellent hosts.

The University of Illinois is the only American University to offer a Masters course in European Studies and it was a real pleasure to talk with Dr Neil Vander Most, Professor Kostas Kourtikakis and their engaging and well informed students. Questions covered a whole range of issues including the history of the EU, but not surprisingly, invariably came back to Brexit and why the British people voted to leave a successful union of 28 countries.

As part of their anniversary celebrations, the EU’s ambassador the United States, his excellency David O’Sullivan delivered a thought-provoking speech on ‘the State of the European Union’. In the ensuing roundtable there were plenty of questions about the evolving state of EU-US relations. As the conference coincided with the inconclusive American mid-term elections, there were plenty of opportunities for comparisons and thoughts about the forthcoming European Parliament elections in 2019. These and other issues were also discussed when I was a studio guest for an interview with the local radio station, Illinois Public Media.

My keynote speech on Saturday morning included my own personal thoughts on Brexit and how the then prime minister David Cameron badly mis-judged, both the mood of the country and his own popularity. After eight years of austerity, the lack-lustre ‘remain campaign’ gave the British people a rare chance to object to the EU and register a complaint anything else they fancied or didn’t fancy. There were obvious comparisons with Americans’ objections to President Trump but also warnings for other EU countries who fail to face head-on, the concerns of the voters.  From the unrest in France to the rise of fringe or ‘populist parties’, the EU can be the catalyst for negative voting.

After a hectic four days, I left Illinois for London to be present at the commemorations for the end of the first world war. Twenty million people died in the ‘war to end all wars’ which only preceded another brutal conflict just twenty years later. An awful testament to what happens when Europe is not united. Fortunately today’s liberal politicians and keen voters have more sense then our forefathers … I hope.

My sincere thanks to Professor Carla Santos and all at the University of Illinois for an excellent and stimulating few days and to the Former Members Association for their organisation.