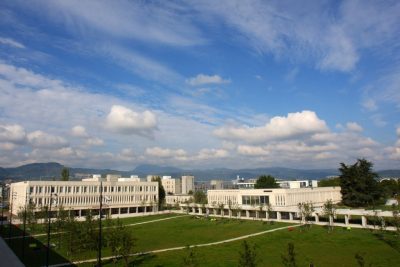 Blaise-Pascal-University in Clermont- Ferrand organized from 19-21 October 2016 a high-level Seminar to discuss the outcomes of the ‘Adapt- Econ II’ research-project (funded by EU-FP8) with experts from various European universities (from Iceland to Romania) and Jean-Monnet-Students working as young researchers in the project, preparing their PhD. Besides the very impressive research-findings the participants were interested to discuss the role of the European Parliament in decision-making on sustainable development and degrowth – especially decarbonisation and resourcemanagement – and by this reason my colleague Eva Quistorp and I were invited to give an insight related to our specific experience: Already in the 1980’s debates on sustainability started in the European Parliament, the concept of ‘sustainable development’ was included for the first time into the Maastricht-Treaty 1991 and became one of the prior goals of the Union in 1999 with the Amsterdam-Treaty. Since 2001 the EU-Commission has been presenting strategies to reach this goal – not to forget that the European Environmental Bureau (EEB) wasfounded in 1974 – so one may conclude the record of the European Union in sustainable development strategies is not so bad– at least compared with strategies on national levels.

In nine thematic sessions and twodebates with politicians the experts and young researchers discussed issues as macroeconomics, inclusive wealth indices, climate change, propositions for decarbonisation and environmental efficiency of industrial ecology. They presented their ‘world 6’ dynamic model on metal resources, showing scenarios on the finite nature of metals (especially copper and iron). In a public debate Former MEPs and French politicians pointed out the difference between the good purposes of European sustainable development initiatives, circle economy and decarbonisation and the still very limited practice. What the young researchers wanted to know especially from the Former MEPs was ‘how can we develop paths to communicate our findings with the European Parliament – and how could a Forum for such an exchange be initiated?’ Unfortunately, we as former MEPs couldn’t give an answer to this demand. But wouldn’t this be an idea to follow – for example as Forum or a ‘Structured Dialogue’ (well experienced by the EU-Commission in various fields of activities) between the parliamentary Committee for Research and young European researchers?