The University invited a Former Member to an interdisciplinary international conference on the European Parliament. The conference was funded by EACEA, and involved not only scholars and policymakers, but intended to target mainly doctoral students and students.
A former member was invited to explain how a European parliamentarian works. The conference was attended by our member John Iversen. Here below you can read his report that was published on September 2020 FMA Bulletin.

TOWARDS THE EP ELECTIONS OF MAY 2019:
Report on interdisciplinary international conference on the European Parliament

In my speech, I reviewed the special feature of the European Parliament as a supranational parliament. • It is the world’s most
far-reaching experiment in transnational democracy.

• It is obligatory to operate in three different locations rather than have one single seat.

• It is multilingual to a degree unknown elsewhere.

• Like the US Congress, but unlike national parliaments, no government emerges directly from a majority in Parliament. 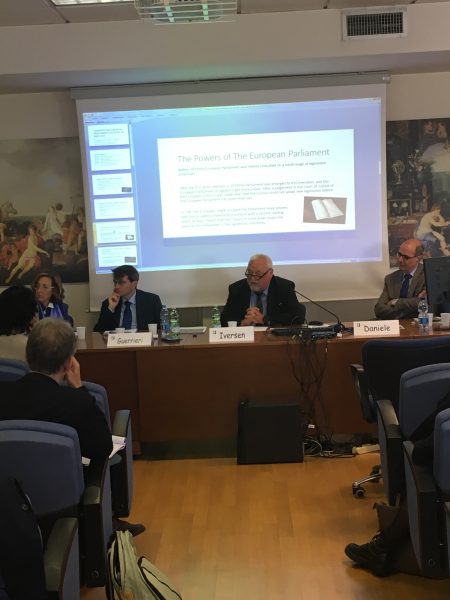 In a year where it is both 40 years since we had the first direct election and 40 years ago that Jean Monnet died, it must be said to be quite
impressive that the European Parliament today is really one of the two legislative chambers of the European union. The debate was lively and it was very well organized. Thanks to the University of Rome Tor Vegata and AUSE – Associazione Universitaria di Studi Europei for the invitation to represent the European Parliament Former Members Association.