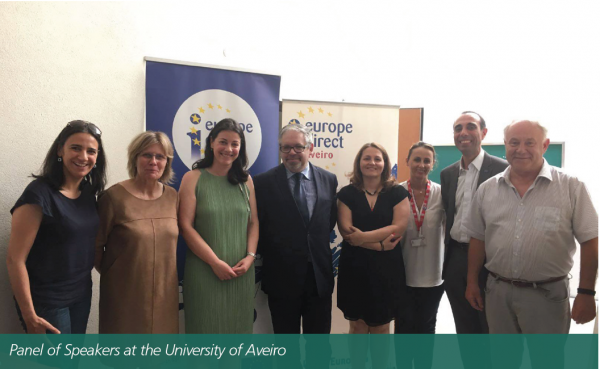 Gyula HEGYI, FMA Member, was invited to participate in a conference organized by the University of Aveiro.

Aveiro is an ancient Portuguese city south of Porto. The University of Aveiro has been founded in 1973, and nowadays more than 13000 students and hundreds of professors study and teach there. My host, Professor Luis Mota keeps a semina on international studies in English. On the first day of my visit I was invited to participate an afternoon session of his seminar. Instead of the originally planned one hour it took two and half hours, as the students raised dozens of questions. All of them spoke good English, and one of them was an Erasmus student, coming from Lithuania.

They were rather well informed on the structure and problems of the European Union. We spoke among other subjects on the different role of the Parliament, the Council and the Commission, on the Brexit, on the importance of the Erasmus program and on the concept of the ‘multispeed EU’. They raised some ‘uncomfortable’ questions on the political situation of my homeland
Hungary as well, but I tried to answer them. I talked about the many possibilities to get a scholarship at the Parliament, at the Commission (where I also worked) and at the European HQs of the political parties. The next day I visited the ‘Europe Direct’ information centre, where I met some students who just dropped in, as the information centre has an active contact with the University. The relatively small but well equipped centre provides many facilities for those who are interested in EU affairs. And it seemed to me that there are many people in Aveiro who are really interested in…

In the afternoon I participated in the event which was the main program of my visit. The social and political department held a conference on ‘The reflection paper on the social dimension of Europe’, and generally on the social policy of the EU. The ‘Reflection Paper’ of the Commisson was released on 26th of April, so it was one of the first occasions to discuss it on a public event. My fellow panellists were Ms Sofia Colares Alves, Head of the EU representation in Portugal and Ms. Mafalda Guerreiro, Member of the Central Committee of the Portuguese Communist Party. It seemed to be a well chosen trio. Ms Alves performed the official Commission line, with informative details. The Communist Ms Guerreiro strongly criticised the ‘Big Businessoriented’ EU policies, as her party is rather Euro sceptic. (Unlike the very pro-Europe Hungarian Left.) I tried to underline that one of the three options suggested by the Commission is rather a progressive idea. While the other two options,  limiting the social dimension to free movement or let the Member States to choose certain elements of their social policies ‘a la carte’ are rather dangerous ideas. The lack of a strong common social policy destroys the public support of our common European project, and strengthens the extreme and populist movements. The audience was very active, and besides our different backgrounds the three of us agreed to improve the social commitments of the EU.

I must mention the important role of Gil Martins dos Reis organizing my and the forthcoming visits of other colleagues to Aveiro. As a student of the University and a trainee of the EP Former Members Association, Gil contacted his ‘Alma mater’ and our Association. As the University of Aveiro runs good and important courses on European studies, we should help them with our experiences.