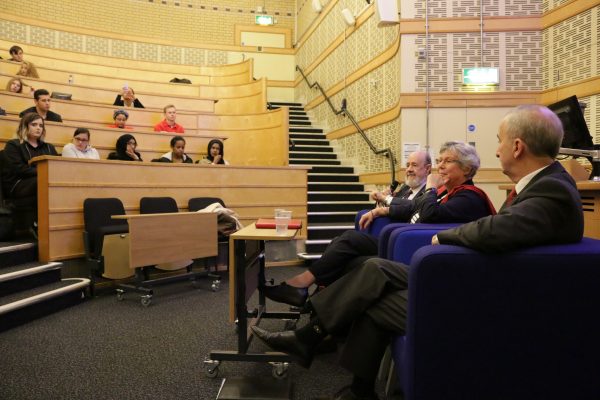 Leicester is a market town of about 300,000 people located in the South Midlands of England. A one hour fast train journey from London but much nearer to Birmingham. It is the resting place of the recovered remains of King Richard lll.

It has two centre-city located universities. De Montfort, named after Simon de Montfort Earl of Leicester, is a public research and teaching University.

It might be noted that Leicester voted Yes to Remain in the EU referendum. This issue continually arose during our visit and especially in Question and Answer sessions.

Our delegation of former members was: José María Gil-Roberts Gil-Delgado, (EPP Spain) former President of Parliament, and of the FMA; Barbara Weiler, former SD Member for Germany; and Gay Mitchell former Minister for Europe and MEP for Ireland.

As well as attending a variety of University classes where Questions and Answer sessions were usually the norm, we also met 44 local children, aged 14 – 16, with their teachers and had lively and José María Gil – Robles, Barbara Weiler and Gay Mitchell during their visit at De Montfort University interesting exchanges with them. The visit was organised by Professor of International Relations and Head of the Department of Politics and Public Policy, Alasdair Blair.

The issue of referenda as an instrument of public policy was raised and the pros and cons discussed. Other questions raised included:

• Travel, work and settlement arrangements within the EU after Brexit.

• Is Brexit the beginning of the disintegration of the European Union or is it bringing other members closer together?

• Would it make sense now to create a formal ‘two-tier’ European Union?

• Other than Brexit, what do you see as being the biggest challenges now for the EU and its Institutions and agencies?

• How can the EU improve economic growth, living standards and employment so as to retain popular support and avoid other EU nations following the Brexit route?

• Could immigration and customs controls function successfully in the island of Ireland without a ‘border’ – and would other EU nations, such as Spain, accept an independent Scotland as an EU member?

Post-graduate diplomacy and world order students, and politics students were interested in: Competition Policy, Communicating Europe, implications of Brexit for stability in Europe, how the High Representative for Foreign Affairs and European External Action Service works, how national and EU ambassadors cooperate abroad and how embassies to the EU network. The different forms of diplomacy – national, intranational were raised. While Business post-grad students raised Foreign Trade and relocation of business. Some of these questions arose in exchanges with students, but some of the most interesting and lively exchanges took place on Wednesday evening when students and staff were joined by invited members of the public. The attitude of most was one of sorrow for the Brexit decision and hope that a solution could be found as quickly as possible, and certainly before the two-year negotiating period allowed when Article 50 is triggered this March.

The three person delegation was broadly in agreement in our responses, though with different emphasis on some of the issues. Overall we came away with the view that those we met are not, in the main, happy with the Brexit referendum outcome and, at the very least, want continued strong relations with the EU and an end to uncertainty. The future involvement in the Erasmus programme for the Britain and its students was also raised. In discussions we had with academics over lunch and dinner similar concerns were discussed. This was a very useful visit, both an opportunity to inform people of how the EU, warts and all, actually works, and to hear their very reasonable questions and concerns.